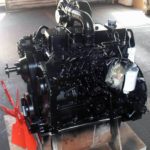 The 3.9L Cummins 4BT engine was released in 1983 and was predominantly used in smaller commercial vans such as bread trucks and other small delivery trucks. Despite its initial use in commercial vehicles, the engine has become extremely popular in the 4x4 and off-road communities for engine swaps. Additionally, it is commonly used in farm equipment, forklifts, dozers, and other … END_OF_DOCUMENT_TOKEN_TO_BE_REPLACED