The 5.0 Cummins engine was launched in 2015 in the Nissan Titan XD diesel truck. Producing 310hp and 555lb-ft. of torque, the Titan XD was built to fill the gap between half-ton gas trucks and the heavy duty quarter and full-ton diesel pickups. The Titan XD with the 5.0 has a towing capacity of 12,830 pounds.

The expensive cost of adding the 5.0 Cummins to the Titan, combined with various engine issues, and the limited towing benefit over gas trucks caused the 5.0 Cummins to be retired after the 2019 model year. In addition to the disappointing mechanical problems that plague the engine, Titan sales in general were very low, especially compared to its Ford, GM, and Dodge competitors. Not offering enough benefit over the gasser trucks, XD sales were very low leading to its discontinuation.

Unlike tradition inline-6 Cummins such as the 5.9L and 6.7L, the 5.0 Cummins is a 90-degree V8. Despite its different design, the 5.0 ISV shares some similarity with the Dodge truck engines such as aluminum alloy cylinder heads and a compacted graphite iron block.

If you would rather consume this content via a video, check out our Nissan Titan XD 5.0 Cummins Common Problems video below or on YouTube:

While the 5.0 Cummins is available in various commercial vehicles the common problems we discuss here are mostly associated with the Nissan Titan XD trucks. 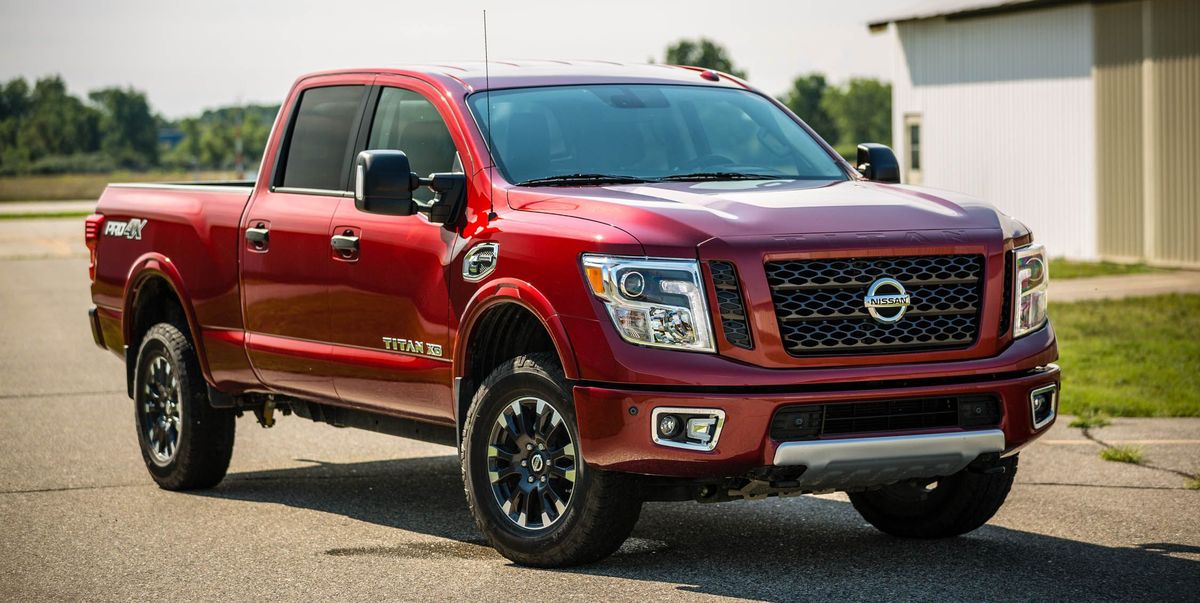 DEF stands for diesel exhaust fluid. DEF is part of the selective catalytic reduction, or SCR, system found on 2010+ diesels. The SCR systems works to reduce emissions by spraying diesel exhaust fluid into the exhaust system where it is converted to ammonia which then breaks down nitrogen oxide into nitrogen and water.

While the Nissan Titan DEF system has had issues with excessive fluid consumption and false regen cycles, the DEF pump also commonly fails. The DEF fluid sits within a separate fluid tank and has a pump that pulls the DEF fluid from the tank to the injectors where it is sprayed into the exhaust stream.

When the pump fails, the fluid doesn’t get passed to the exhaust system leaving the exhaust gases untreated. Pump failure is mostly caused by contaminates getting into the pump itself. DEF fluids tend to leave behind deposits which then get sucked up into the pump causing it to fail.

Without illegally deleting your emissions systems, the only option is pump replacement. Most diesels will enter limp mode when the pump fails which will cause decreased performance, acceleration, etc.

When the DEF pump fails it can take out the injector with it and can also lead to fouling of NOx sensors in the exhaust system. Unfortunately, the OEM pump itself costs nearly $1,000 and labor is likely going to run $500-$750 making this a hefty repair bill.

Another emissions component is exhaust gas recirculation or EGR. Combustion creates a lot of nitrogen oxide which is a harmful gas. In order to reduce the amount of nitrogen oxide that the 5.0 Cummins produces, the engine uses an EGR valve which sends small amounts of exhaust gases back into the intake system to be reburned in the combustion chamber.

The EGR system is predominantly controlled by one valve. The valve has an opened and closed position on it which controls whether or not exhaust gas is recirculated. When the Nissan Titan is at idle, the EGR valve is almost completely closed, recirculating the majority of the exhaust gas back into the engine. Under acceleration more oxygen is needed so the EGR valve gradually opens up, letting more air flow to the exhaust system and thus allowing the combustion chamber to fill with more oxygen.

Over time, carbon buildup will start to plug up the EGR valve causing it to either stick open or closed. The valve diaphragm can also crack or leak. Additionally, the EGR cooler leaks frequently which was eventually recalled for a majority of the Titan XD trucks.

When the EGR valve fails it usually fails open or closed. If it fails closed, the engine will have a difficult time accelerating or operating at any speeds above idle. This is because the combustion chamber will be primarily filled with oxygen-less exhaust gases and more oxygen is necessary at higher engine speeds. At higher speeds the engine will be starved of air which can cause misfires and serious performance losses.

If it fails open then no gases are recirculated. While this has less performance related issues it will still trigger a code in the system and can put your truck into limp mode. It will also lead to increased emissions, worse gas mileage, and rough idling.

The calibration on the Aisin 6-speed automatic transmission used in the Nissan Titan XD was extremely poor and the overall manufacturing was lackluster. This problem is a bit more generic because there isn’t necessarily a fix for it outside of swapping an aftermarket transmission onto the truck.

Owners have reported a lot of issues with hard shifting, transmission overheating, jerking, slipping, etc. Additionally, there have been a number of owners plagued by complete transmission failure.

Overall, the transmission itself is simply poorly manufactured which which makes for an uncomfortable driving experience.

Due to a manufacturing defect, low oil pressures would result in the turbo being staved of lubrication. This could cause the turbine wheel to come in contact with the turbo housing. When this happens metal shavings can be sent through the turbo and into the engine leading to potentially catastrophic engine damage.

The recall had three potential outcomes. If your ECU was storing a P0524 low oil pressure code, you get a new engine and new turbo. If the code was not present, the turbo is pulled and inspected. Upon inspection, if the turbo had contact with the housing, the turbo and engine were being swapped. If the turbo passed inspection, the engine remained but the turbo was still replaced.

While this incident was mostly attributed to 2016 models, there have been a number of owners who were not affected by the recall who have had multiple turbocharger failures.

The fuel pump is responsible for pulling fuel from the gas tank and sending it to the injectors via the fuel lines. The 5.0 Cummins uses a Bosch CP4.2 fuel pump. Fuel pumps operate under high pressure and therefore are prone to natural wear and tear over time that can cause them to fail or weaken.

The most common cause of fuel pump failure is contaminated fuel. Diesel fuel is less refined than traditional gasoline which makes it more susceptible to picking up contaminates like water, dirt, grime, etc. When these harmful substances get into your gas tank they get sucked up by the fuel pump which can damage its internal components causing failure.

Outside of the pump itself, the fuel level sensor on the 5.0 Cummins Titan XD is known to be faulty, more specifically for 2016 year models. The fuel level sensor was placed in a bad location of the gas tank for this model year which would incorrectly read fuel levels and cause the car to shut off while driving. This occurred most frequently when fuel levels were around 1/4 of a tank or lower.

When the fuel pump itself fails it can no longer deliver enough fuel to the injectors. Harmful contaminates can also passthrough the pump and lines and take the fuel injectors out along with the pump. To prevent fuel pump issues its important to always use good diesel fuel and add fuel lubricate.

Overall, the 5.0 Cummins engine featured in the Titan XD is plagued with issues. While the major components of the engine such as the heads, the block, internals, etc. all seem to be durable and hold-up very well together, the rest of the engine does not. Cummins manufactured the block and major engine components which is likely why these parts don’t tend to have any major flaws. Nissan is responsible for the engineering behind all of the major engine systems that are problematic on these trucks.

The emissions systems on the Titan XD are all problematic, the turbochargers are known to fail way too soon, the fueling system has issues, the transmission is awful, and so on and so forth. Outside of these major engine problems, the XD fell short to start with. With the engine being nearly a $10k upgrade it only offered 1,000lbs. more towing capacity than its V8 gasser counterpart. Additionally, the ride quality, interior, and overall driving experience were far inferior to that of its Dodge, GM, and Ford competitors.

While we do believe that the 5.0 Cummins engine itself is a very durable and strong engine, the 5.0 inside the Titan XD cannot be considered reliable. We have faith in the block, heads, internals, etc. all lasting upwards of 300,000 miles. However, we simply do not have faith that a Titan XD with the 5.0 Cummins will make it anywhere near that sort of mileage without tens of thousands of dollars in maintenance and repairs along the way.

Another noteworthy reason to stay away from these engines is that they are no longer supported by Nissan. Since they have discontinued this engine and don’t have any other diesel trucks, all of the diesel truck mechanics at the dealerships have since been let go.