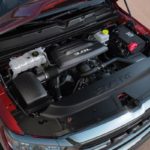 The Chrysler 3.0 EcoDiesel engine was released in 2014 in the Dodge Ram 1500 and Jeep Grand Cherokee vehicles. It is a 3.0L V6 turbocharged diesel engine. Coming in at half the size of the Cummins diesel engines, the 3.0 EcoDiesel was the first diesel engine option for half-ton Dodge Ram's since the early 2000's. Despite Ram 2500/3500 HD trucks using a Cummins turbo-diesel … END_OF_DOCUMENT_TOKEN_TO_BE_REPLACED