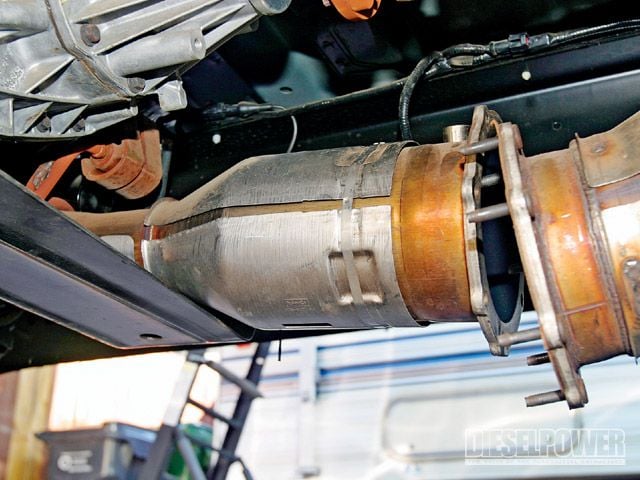 What is a 6.4 Powerstroke DPF?

The DPF however isn’t the only emissions system within the 6.4 Powerstroke exhaust. The 6.4L also has a diesel oxidation catalyst, or DOC. An oxidation catalyst is essentially the same as a traditional catalytic converter, just specifically for diesel engines instead. The DOC is the first emissions equipment in the exhaust and sits right after the downpipe. The DPF then comes after the DOC. Fortunately, SCR and DEF fluid weren’t added until the 6.7 Powerstroke in 2011.

The last emissions system to quickly cover is exhaust gas recirculation, or EGR. This system is completely separate from the DPF as it sits within the engine and not the exhaust. The EGR system captures exhaust gases after they leave the combustion chamber and before they enter the exhaust. It takes a portion of these gases and recirculates them back into the intake manifold so that the gases can be re-burned to decrease emissions even more.

What does a DPF Delete Remove?

Deleting the DPF system on a 6.4 Powerstroke will also delete the diesel oxidation catalyst. The exhaust system goes like this: downpipe > DOC > DPF > muffler. A DPF delete kit is simply one piece of exhaust piping that bolts up to the downpipe and to the muffler. Therefore, it deletes both the DPF and DOC that sit within it. The DOC isn’t a common failure item but it is restrictive for performance which is why it also gets deleted.

A DPF delete does not delete EGR. The EGR system is deleted separately with its own delete kit.

Since exhaust gas recirculation takes place before the exhaust, it is completely separate. A DPF delete is purely a race pipe, or straight pipe for your exhaust and therefore doesn’t impact EGR.

The EGR system has a valve, cooler, and various hoses that control the recirculation of gases. Therefore, deleting the EGR is slightly more complicated since there are more pieces to remove. The EGR cooler is also a common weak spot on the 6.4 Powerstroke which is why EGR deletes are also popular.

Deleting the EGR system is less of a performance mod and more of a reliability upgrade. EGR essentially dumps dirty soot and particulates into your combustion chamber which isn’t good for engine longevity.

The two primary reasons for deleting the DPF are performance and reliability. DPF clogging is a common problem for the 6.4 Powerstroke and replacing the filter is rather expensive. When the DPF clogs it causes more exhaust backpressure which puts stress on the turbo and increases EGTs which adds stress to the engine and therefore hurts reliability. Secondly, the backpressure it creates decreases the efficiency of the turbo and restricts performance.

Deleting the DPF doesn’t necessarily add power. It rather increases power potential and maximizes power gains from other modifications. A tune is required to remove the filter so the majority of the gains achieved come from the tune. However, the performance benefits come when you are really pushing the 6.4 and have an upgraded turbo.

While removing the diesel particulate filter is good for reliability and performance, it’s bad for the environment, emissions, resale, and so on.

Deleting emissions systems is getting more and more government attention. Big fines are being levied against people who modify emissions equipment, and especially against those that sell or install illegal exhaust systems. Therefore, deleting the DPF isn’t without risk. You will likely need to DIY the install since shops won’t risk fines anymore. And if you’re caught by the police you can get some hefty fines.

Unless you re-install the factory equipment you will lose some resale value. And your buyer base will be limited since they will either need to install it or register it in an emissions free county. The last con or consideration is that you also need to run a tune. This isn’t necessarily a bad thing but it will add $500+ as you will need the device plus a custom tune.

Should You Delete Your DPF System?

Better gas mileage, improved reliability, and more power sound great. However, the downsides shouldn’t be taken lightly. We really don’t recommend deleting your 6.4 Powerstroke DPF unless you are looking to push crazy power, or if your DPF has already failed. Unless you are pushing mad power, the DPF isn’t really that restrictive or bad for performance.

If you don’t have a clogged DPF, or an upgraded turbo then removing the particulate filter is just a headache. You won’t pass emissions, some shops won’t touch your truck, and you could get fined a hefty amount. Or have your truck crushed depending on what state you live in.

The reliability benefits and gas savings are real so we understand the desire. At the end of the day, it is a tradeoff between the risk and rewards and whether you should do it depends on your risk tolerance.

How to Delete the 6.4 Powerstroke DPF

If you don’t care about the downsides or legalities, here is what you need to remove the DPF:

DPF delete kits are really just exhaust kits, so fortunately they are pretty cheap. However, you do have a few options which we’ll cover below. The most important thing you’ll need is a tuner that has a tune capable of dealing with a deleted engine.

The simplest delete kits just replace the exhaust piping from the downpipe to the muffler. You get one solid piece of hollow exhaust piping to bolt on up. These kits are usually around $250.

Your second option is to get a full exhaust system. Most exhaust systems will be downpipe-back systems meaning they bolt to the downpipe. I’m not aware of any turbo back exhausts as the downpipe needs to be upgraded separately. Anyway, with this option you can either do aluminum or stainless steel piping, muffler or muffler-delete, and so on. These kits usually range from $500-$1,000 depending on what material you want and whether you want a muffler or not.

A DPF delete alone won’t add any obnoxious noise to the exhaust. Just keep in mind going with a full exhaust system, especially if you choose on that is straight-piped without a muffler, you will get a lot louder of an exhaust.

There are a bunch of emissions sensors hooked up to the DPF. Additionally, you have regen cycles. Therefore, you need a tune that can tune out all of these components.

Unfortunately, there aren’t any tuners that come pre-loaded with delete tunes. There used to be a few but they have all since stopped due to fines. H&S is probably the most known as they went bankrupt from EPA fines for selling tuners with DPF deletes already installed. You can maybe still find one of these on the market.

If you can’t find an older tuner with a pre-loaded delete tune, then you’ll need to get a custom tune. This again can be slightly challenging since tuners are also being fined. Regardless, a proper tune is a requirement otherwise your 6.4 Powerstroke will go into limp mode and be virtually undrivable.

The 6.4 Powerstroke has three primary emissions systems: DOC, DPF, and EGR. Both the DOC and DPF equipment sit within the exhaust system whereas EGR sits within the engine. Deleting the DPF also removes the DOC.

Removing the particulate filter doesn’t come without downsides though. It will reduce resale value, it won’t pass emissions, it’s bad for the environment, and you can end up getting big fines if you get caught.

Deleting it requires a delete kit and a tune. Delete kits run from $250 up to $1,000 or so depending on how much of the exhaust you want to upgrade. Tunes can run up to $1,000 as well for the device and a custom tune. Ballpark total costs will range from $1,000 to $2,000 depending on the route that you choose.