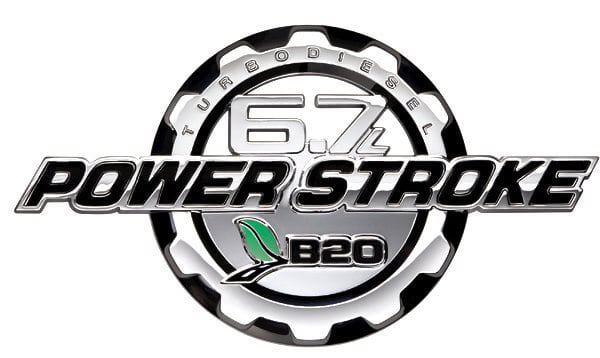 The 6.7L Power Stroke is the first medium duty diesel designed and built by Ford. During design, Ford engineers codenamed this engine “Scorpion” due to the exhaust manifold and turbo being mounted in the engine’s “valley”. Ford Motor Company has done an amazing job with the 6.7 Liter Power Stroke engine, which has impressive performance, fuel economy, reliability, and longevity.

The 6.7 liter engine initially had a unique single sequential turbocharger (SST), which features a dual compressor and single turbine setup affixed to a common shaft. The unit was replaced by a single Garrett GT37 variable geometry turbocharger (VGT) for the 2015 Power Stroke, increasing horsepower and torque in combination with additional upgrades. The SST returned for the completely revised 2017 Super Duty; torque reached an all time high at 925 lb-ft.

Unique to the 6.7 liter engine is the exhaust and intake manifold designs. As opposed to a tradition V engine, the intake and exhaust flows are reversed – the intake manifolds are located on the outer deck of the cylinder head and the exhaust manifolds exit directly into the engine valley where the turbocharger is mounted. The unique exhaust flow design is said to increase thermal efficiency of the turbocharger.

• Exhaust gas recirculation (EGR). A unique feature of the 6.7 liter engine is that EGR flow is controlled by the EGR valve prior to entering the EGR cooler, as opposed to cooling the exhaust gases before EGR flow is managed. This post-cooling system reduces sludge and soot buildup in the EGR valve, minimizing maintenance.
• Diesel oxidation catalyst (DOC). The DOC is a ceramic catalytic converter designed to oxidize hydrocarbons in the exhaust stream.
• Selective catalyst reduction (SCR). The SCR is where diesel exhaust fluid (DEF; 32.5% urea) is injected & mixed into the exhaust stream. Diesel exhaust fluid is used to convert nitrous oxides into water & nitrogen. DEF fluid level must be maintained to ensure proper operation of the system and the truck (an empty DEF tank will result in reduced performance and speed).
• Diesel particulate filter (DPF). The DPF captures diesel particulate matter (soot) and uses active regeneration technology to heat the exhaust system periodically, completely burning soot build up & cleaning the filter.

• The 6.7 liter engine blocks are manufactured by the American foundry company, Tupy. The engines are assembled in Chihuahua, Mexico.
• The pre-production 6.7 liter Power Stroke engine was nicknamed the “Scorpion” due to its unique turbocharger mounting location and exhaust/intake arrangement.
• Engine features 6 bolt main bearing caps.
• “Instant Start” glow plugs are said to provide quicker starts in even the coldest of weather.
• Compacted graphite iron block for reduced weight (160 lbs lighter than the 6.4L Power Stroke).
• Engine uses fractured cap Mahle connecting rods.
• Features piston cooling jets for lower piston temperatures. Oil is jetted into the bottom or the piston and travels through a cavity within the piston, cooling the top of the piston before exiting. This helps lower combustion temperatures and increase engine longevity.
• B20 biodiesel compatible.
• 6.7L Power Stroke receives 18% increase in fuel mileage over previous 6.4L engines.

The fuel injection system delivers up to five injection events per cylinder per cycle using eight-hole piezo injectors spraying fuel into the piston bowl. This engine also supports B20 biodiesel, allowing greener fueling options of up to 20 percent biodiesel and 80 percent petroleum diesel. Garrett’s single-sequential turbocharger features an industry-first double-sided compressor wheel mounted on a single shaft. It combines the benefits of a small turbocharger (faster response) and a large turbocharger (ability to compress and force more air into the engine for more power) in one unit.

All 6.7 liter engines already shipped to dealerships or purchased by customers can be upgraded to Fords new specifications with a free software update available at Ford dealerships.

Available for the 2011 6.7L Power Stroke through a PCM update.

– DPF delta pressure sensor was incorporated in 2013 MY.

• Two NO sensors and modules.

– The second NOx sensor and module was added for the 2013 model year.

• Oil and coolant feed lines to the turbocharger have been updated.

**These changes are mostly for the pickup, although some were applied to the chassis cab

• Turbocharger with the following updates: (Update for pickup only)

– The electronic vacuum regulator valve and actuator was deleted.

• Change to the coolant flow through the EGR cooler. (Update for pickup and chassis cab)

• Fuel pressure and temperature sensor in the low pressure fuel system were combined into one sensor.

– The components physically look the same.

– Longer stroke in the fuel pump.

• New up-pipes and downpipe including a new downpipe bracket. (Update for pickup only)

• Particulate matter sensor and module was added after the DPF.

Some report an average of 20-21 MPG empty on the highway to 18-19 MPG mixed and towing. Actual fuel economy can vary quite a bit depending on driving style and actual use of the 6.7 Power Stroke engine. Nonetheless, it’s a pretty efficient engine overall and gets solid MPG.

We think Ford’s decision to produce their own diesel engine was a smart one. With the issues of the 6.0 Power Stroke, they needed to re-establish reliability in the brand. The design changes for the 6.7L are a huge part of it’s success.

Being the first medium duty diesel designed and built by Ford, they wanted a powerful as well as reliable engine. Ford set out to achieve this goal by first keeping cylinder heads held down. The 6.7 features six bolts per cylinder,  no longer would they rely on four bolts per cylinder. The cylinder heads of the 6.7 engine also feature dual water jackets.

Another key change made in the head of the 6.7 engine was the rocker arms. There is a dedicated rocker arm for each valve. Previous generations of the Power Stroke engine had one rocker pushing on a bridge, actuating two valves.

With the 6.7, Ford also addressed common problems with some of the earlier Power Stroke engines from International, specifically the 6.0.

EGR system concerns historically have plagued all modern diesel engines equipped with them in one way or another. Some failures have been extremely troublesome and even lead to catastrophic engine failures. Head gasket failures and cooling system concerns where common on the 6.0 Liter engines, due to the oil and EGR cooling.

For the 6.7 engine, Ford opted to use two cooling systems. The primary cooling system is for the primary engine components (heads, block, etc). The other cooling system is to cool the EGR, fuel, transmission fluid, and charge air cooler (air to water on the 6.7 instead of air to air). By separating the cooling systems into two, Ford eliminated the concern created by hot exhaust gasses adding additional heat into the engine cooling system. They are also able to run them at different temperatures to optimize cooling.

The 6.7 Liter Power Stroke engines have proven to be fairly reliable. We do not see a large percentage of engines with serious issues. but they do have a few common problems that are outlined below.

Below are a few of the common issues with the 6.7 Power Stroke engine.

The early 2011 6.7 liter engines had an issue where the exhaust valves would develop cracks and eventually chip a piece off into the cylinder, which would subsequently damage a glow plug, that would be the primary indicator of the exhaust valve’s failure. Engines built after March 15, 2011 shouldn’t have this issue, as it has been said the problem was found and corrected.

One of the most common cause of check engine lights and stop safely warnings on the 6.7 are the Exhaust Gas Temperature (EGT) sensor failures. They are so frequent that Ford has issued a warranty extension to cover these sensors. Most of the time these sensors are easily replaced, with some requiring heating with a the torch and others using a machinist tap to repair the threads.

In the 2011 6.7 liter engine, EGR cooler cores are known to become restricted, which is detected by the engine control software and will result in the Check Engine light being turned on and a DTC (Diagnostic Trouble Code) being set. While it is possible to find an issue with the EGR valve, Bypass valve or a sensor, the cause is commonly caused by the cooler being restricted and sometimes completely clogged with carbon.

In the early years of the 6.7 liter engine, there was a high percentage of radiator, turbo base coolant seal, turbo coolant inlet fitting, and water pump leaks. The turbo coolant inlet fitting is rather easy to replace with the removal of the upper intake, but removal of the turbo charger for replacement of that block to turbo gasket is a much harder task.

Oil and coolant leaks that show up at the lower rear of the engine at the transmission converter housing more than likely originate up top. Both fittings are located at the top of the center housing of the turbo and a clear view of them is obstructed by the upper intake manifold.

Radiator replacement is complicated by the size, angle of mounting, and the addition of the secondary cooling system radiator.

2012 – 2014 upgrades include the cooling and lubrication lines going into the turbocharger which have been changed from quick connections to bolt fasteners. This improves both sealing and durability.

We have come across a few oil leaks coming from the front cover area because of the loosening of the vacuum pump bolts.

Model year 2017 and above are now using a larger turbocharger to reduce failures (and create more power!).

fuel rail pressure sensor failures, fuel rail temperature sensor failures, broken injector return lines, NOx senors (now under a TSB), and other repairs that require the replacement of the entire SCR system. High pressure fuel system contamination is a very common and expensive repair but occurs most frequently from user error, due to water contaminated fuel or DEF additions to the fuel tank.