Downpipe upgrades are a major topic for any turbo engine. The downpipe (DP) bolts directly to the turbocharger making it an incredibly important piece of the exhaust system. Among the best bolt-on upgrades for the 6.7 Cummins turbodiesel is a downpipe. What is it that makes the DP such a great mod? In this article, we discuss the benefits of a 6.7 Cummins downpipe and list some of the best upgrades.

What Is A Downpipe?

The downpipe is a pretty simple part of the exhaust that bolts to the turbo. It’s unique to turbo engines. Downpipes often use a catalytic converter. Good for emissions reasons, but not great for performance or heat. Since the DP bolts directly to the turbo any back-pressure creates a major restriction.

That back-pressure increases EGT’s, slows turbo spool, and reduces power and torque. As such, the idea in modding the 6.7 Cummins downpipe is to reduce back-pressure. Compared to the rest of the exhaust the downpipe is generally the most important due to its location just behind the turbocharger. 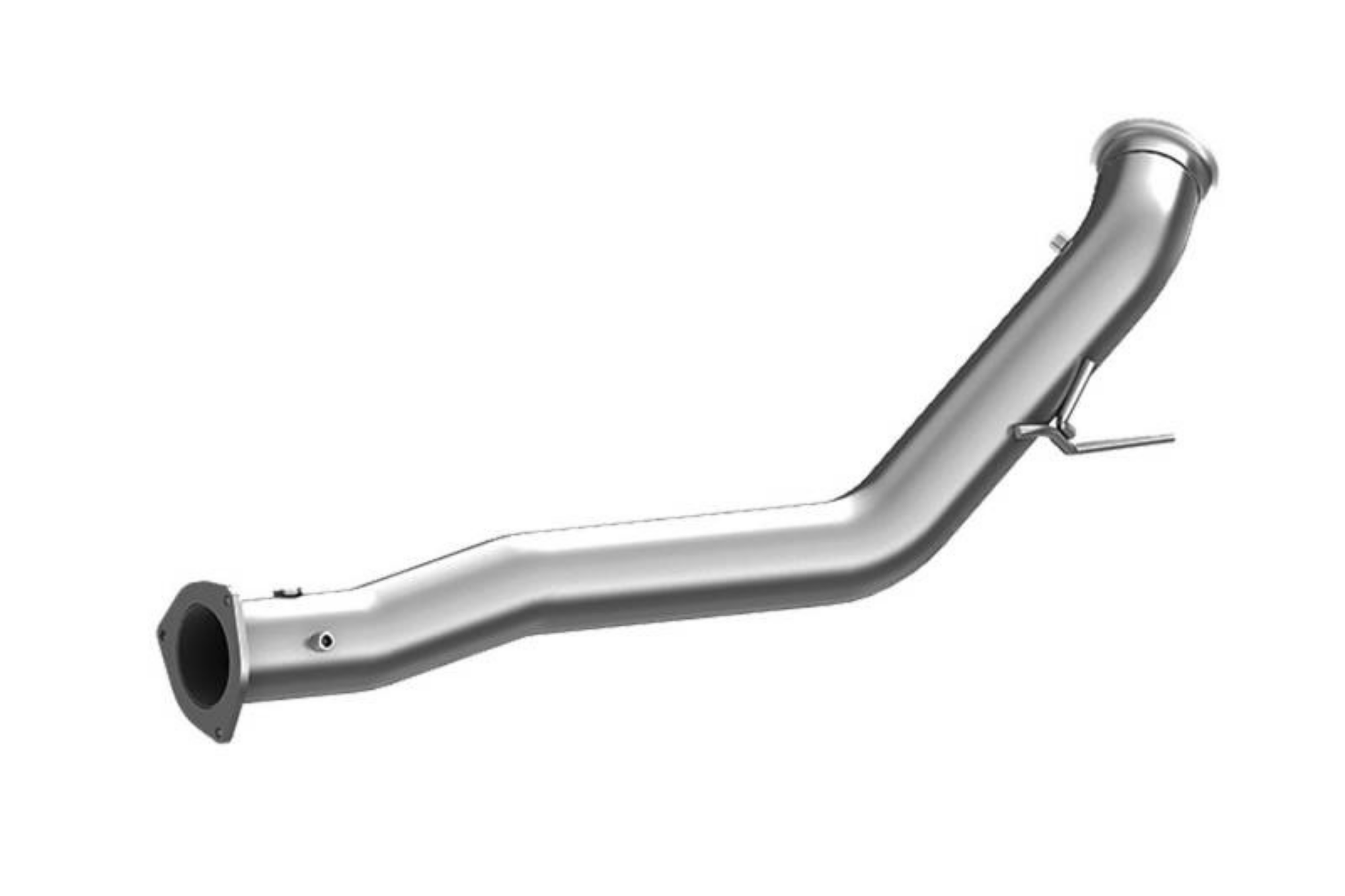 Not all downpipes on the Dodge Ram 6.7L turbodiesel are the same. There were actually some major changes to what lies in the DP. Here’s a quick list by year:

Early model engines use a diesel oxidation catalyst in the downpipe. It’s basically the same thing as a catalytic converter with a different name on the 6.7L diesel engine. This is the part of the DP that creates a major restriction.

Downpipe mods actually don’t have much, if anything, to offer for 2013+ Cummins 6.7 engines. There is no longer a DOC inside the pipe. Instead, it’s a simple flex pipe. As such, 2013+ engines aren’t a focal point of this article. Unless you’re going to a 5″ exhaust there’s no reason to mod the downpipe.

That said, when it comes to larger exhausts a 5″ downpipe is important IF you’re going with a 5″ exhaust. EGT’s and pressures are highest immediately after the turbine, so that’s where you want to remove as much restriction as possible. Whether or not a 5″ exhaust is worth it over a 4″ exhaust is a discussion for another time.

With the basic info out of the way it’s time to dive into the meat of the performance and benefits. This info is targeting 6.7 Cummins downpipe upgrades on 2007-2012 engines. Again, the 2013+ diesel engines do not have a major restriction in the downpipe – just a simple flex pipe.

Since the ultimate goal of a downpipe is to reduce the back-pressure it’s a great mod on earlier engines. Removing the cat (DOC) all together is going to offer the best performance. We’ll circle back to that point in a few moments.

A few benefits to an upgraded downpipe on the Dodge Ram 6.7L engine include:

Catless downpipe upgrades can offer about 5-15whp and 10-30wtq. Much of the power gain depends on other mods on the truck, tuning, etc. Without a tune you likely won’t see much power or torque benefit. More aggressive tunes on heavily modded 6.7 Cummins turbodiesels may show even higher gains.

Anyways, you’ll also notice quicker turbo spool due to less back-pressure. It’s also normal for EGT’s to lower by about 50-150°F. As with power gains, exact results will vary depending on mods, tuning, and other factors. Removing the DOC also means there aren’t any cat clogging concerns.

Removing the stock DP and catalyst will increase the engine, exhaust, and turbo sounds. We enjoy the sound, and think it’s pretty modest with just the downpipe mod. You’ll definitely hear a lot more turbo spool and maybe a little more drone at highway speeds.

However, it can start to get pretty loud if you’re modding the whole exhaust. Some may enjoy a complete straight pipe while others might find it a bit too loud and obnoxious. It’s hard to describe exact sounds and noise levels in words, so we’ll leave it there. Simply something to keep in mind before modifying the 6.7 Cummins downpipe and/or the rest of the exhaust.

We’ve been referring to this as a downpipe upgrade all along. However, downpipes alone are typically hard to find. There are a few options around. Most 6.7 turbodiesel downpipe upgrades are actually known as cat & DPF delete pipes.

These pipes run from the turbo (downpipe) to just before the muffler. You can also find full exhaust that also delete the muffler, and run all the way back to the exhaust tip. If you just want to delete the cat in the downpipe then gutting is a common option.

We’ll discuss some of these options in greater depth as we move onto the best 6.7 Cummins downpipe upgrades. It’s just important to note that many aren’t actually called downpipe upgrades since they extend further.

One final and quick point of discussion. You’ll come across a lot of downpipe upgrades that are intended for upgraded turbos. If you see mention of S400 or something along the lines it’s for an S400 turbo upgrade.

We’ll address all of this in the future with a turbo upgrade article for the Dodge Ram 6.7 Cummins. Anyone on the stock turbo should avoid these downpipes, though.

Surprisingly the list of 6.7 Cummins downpipe upgrades is fairly short. There are surely plenty around that we’re not aware of, so keep that in mind. The below is by no means an exhaustive list. Rather, these are a few of the options that we believe offer a good balance of price, quality, and performance.

*As discussed above, it’s a lot easier to find the 6.7 Cummins cat & DPF delete pipes. Downpipes by themselves are tough to come across.

Up first is an option that extends beyond the downpipe itself. DPF Delete Shop offers this DPF & cat delete pipe for the 2007-2012 Dodge Ram Cummins 6.7 diesel. It’s a great option for those looking to get rid of the DPF and stock downpipe. The delete pipe also comes in at a reasonable price of $237 for aluminized steel.

However, stainless steel is likely the better long-term option. It’s a lot less prone to rusting over the years, so we would spend the extra ~$75 for stainless. Anyways, not much else to say here. It’s a simple straight-pipe design that does what it’s designed to do for a good price.

We’re simply referring to it as gutting, but there are two primary methods here. One is to actual gut out the catalyst material within the OEM DP. Another is to cutout the whole cat section and simply weld in a new section of piping. They’re two effective and cheap ways to mod the 6.7 Cummins downpipe.

It’s likely more hassle than necessary if you plan to delete things like the DPF, anyways. In these cases your best bet is likely buying a full exhaust or DPF & cat delete pipe. Nonetheless, for those only wanting to mod the Ram 6.7L diesel downpipe this is a viable option.

The Tuner Depot 6.7 Cummins cat and DPF delete pipe is very much the same as the first option we discussed. This one is a little more expensive, and is only available in aluminized steel. At $275 it’s still a pretty good price, but we do prefer the idea of stainless steel.

Keep in mind – most of these straight-pipes are pretty simple. A good material and easy fitment/installation without any exhaust leaks are the two primary things to look for. Otherwise, simply pick a 6.7L Cummins cat & DPF delete pipe that grabs your attention or comes in at the cheapest price.

We write about downpipes often since they’re such a great upgrade for almost any turbo engine. That also applies to the Dodge Ram 6.7 Cummins turbodiesel. However, 2013+ engines do not have any restrictive parts in the OEM downpipe so benefits are minimal to non-existent.

On the other hand, 2007.5-2012 6.7 Cummins engines can see excellent performance gains with DP mods. It’s not unrealistic to see 5-15whp and 10-30wtq with quicker turbo spool. Lower EGT’s and no clogging are two other great benefits. Not many downpipe mods alone exist, though.

Most 6.7 Cummins downpipe upgrades are actually in the form of DPF & cat delete pipes. It includes the DP but extends further back in the exhaust to also delete the DPF. Look for a stainless steel option if rust is a concern, and ensure it’s a product with quality fitment. Outside of that these pipes are pretty simple. Pick one that looks good, has the cheapest price, or whatever you value the most.

What’s your experience with 6.7 Cummins downpipes & delete pipes? Are you considering any?

Or check out our 6.7 Intake Horn Upgrade Guide