The massive 8.0 Magnum V10 was available in the 1994 to 2003 Dodge Ram 2500 and 3500 models. Its 310hp and 450tq made it the most powerful gasoline engine available in a passenger pickup truck. Dodge Ram V10 Magnum engines also offer the full 450 lb-ft of torque at a mere 2,400 RPM’s. The low-end torque makes the 8.0L engine very capable at towing. In this article, we dive deeper into the 8.0 Magnum specs and discuss engine reliability and common problems.

The Magnum engine was a gas engine alternative to the 5.9 Cummins 12v and 24v which was an upgrade option for the three-quarter and full-ton Ram trucks. The V10 gasser actually produced more power and torque than the Cummins diesel engine. The Cummins however had better fuel economy and more low-end torque which made it better for towing. 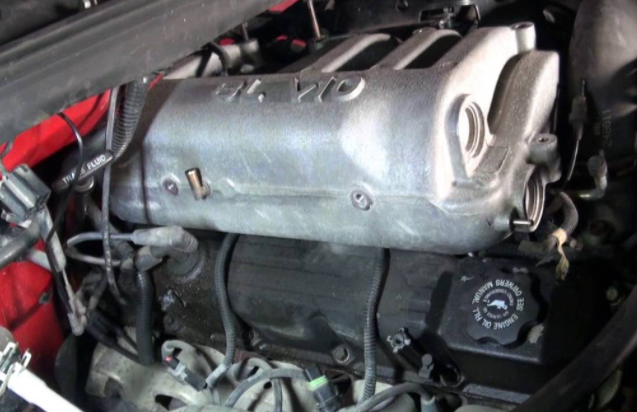 A few specs for the 8.0L V10 Magnum engine include:

Dodge also offers the V-10 Viper engine that shares the same basic dimensions. However, the 8.0 Magnum in the Ram 2500 and 3500 trucks is a totally different engine design. It is also a different design from the 5.9L Magnum engine which is basically a version of the Viper V10 with less cylinders.

Ram V10 engines use incredibly strong and heavy cast iron blocks and cylinder heads. The specs on paper certainly paint the engine as being very strong. Power and torque might not be quite as impressive today. However, 310 horsepower and 450 lb-ft of torque were excellent specs for the era of the Dodge V10 Magnum.

Dodge Ram 2500 & 3500 trucks with the 8.0L V10 typically get somewhere around 11-13mpg while not towing. Add a trailer and the V10’s MPG quickly dips into single digits. It’s the main reason the V10 Magnum’s production came to a halt in 2003. Modern engines were quickly closing the power and torque gap with smaller, more efficient engines.

In the 90’s and early 00’s the power, torque, and towing capability of the Dodge 8.0 Magnum were nearly unmatched. Even diesel engines of the era struggled to match the Ram 2500 and 3500 trucks with the 8.0 V10 gasoline engine. Point is – the overall performance of the V10 Magnum is excellent. It’s likely enough power and torque for most modern needs.

However, as of 2021, the Dodge 8.0 V10 isn’t quite as impressive as it once was. Much smaller modern gas engines – even V6 turbo engines – offer similar performance to the V10. We’re also in an age where some factory diesel engines offer 1,000+ torque. The Dodge 8.0 Magnum was great for its time, but doesn’t quite compare to modern engines. It also comes with the cost of poor fuel economy to power the 10 large cylinders.

The Magnum V10 actually produces some pretty good power from the factory, even for today’s standards. Albeit, it is a V10 and is producing comparable power levels to V6 engines, it still offers a good level of performance. However, it’s always fun to add a bit of extra power to any engine and this V10 is no exception.

The performance aftermarket support for the 8.0L V10 is somewhat limited. Unfortunately the Viper’s engine is not the same and therefore performance parts for it don’t fit the Ram truck models. The biggest caveat or challenge to modding the Magnum V10 is that the automatic transmission can’t really hold any additional power. It is only rated for stock power levels so it doesn’t hold up well to mods. So if you want to add more than just an intake you will be sacrificing transmission reliability unless you have the manual.

There are a few other things you can do like port the heads but ultimately you are limited mostly to some bolt-on mods unless you want to spend a ton of money. Cam upgrades are available but are a bit less common. If you want a little added power tuning is probably the best route, you can drop an intake, headers, and throttle body on it for a bit of extra gains but that’s about it on these engines.

Ram V10 reliability is a tough one. It’s not hard to say the 8.0 liter V10 is reliable. However, it has tough competition going up against the 5.9 6BT Cummins engine which is widely regarded as one of the most reliable passenger diesel engines of all time. This was before the era of endless emissions equipment on diesel engines. The Dodge Ram 5.9 Cummins is known to hold up well beyond 300,000 miles. With a B50 life of 350,000 miles a whopping 50% of engines make it beyond that mark.

Anyways, back to the topic at hand. The Dodge V10 Magnum is a very reliable gasoline engine. It’s not hard to find owners who have 150,000+ miles with very few engine problems, if any. Ram V10 engines are definitely great workhorses that offer solid reliability. However, it doesn’t quite live up to the same longevity standards as diesel engines from the era.

Normally, we write in-depth guides for common problems. However, there really isn’t much to dive into when it comes to the Dodge Ram 8.0 V10 engine. No engine is perfect, though. There aren’t really any common problems that affect a large percentage of the Ram V10 Magnum engines. However, there are a few issues that are more common than others when a failure does occur. We may expand this into an in-depth article in the future, but for now we’ll quickly discuss a few of the Dodge Ram V10 engine problems.

Cylinder heads cracking on the Ram V10 really isn’t a common problem. Issues are far and few between. However, it can and has happened to some engines. It’s mostly worth the mention since a cracked cylinder head on the 8.0 V10 can be an expensive problem. This certainly wouldn’t scare us away from buying a Dodge 8.0L Magnum engine since it’s a very rare issue.

This is a very minor problem in the grand scheme of things. Ram 8.0L V10’s sometimes run into issues with the engine hesitating and feeling a little down on power. Of course, all of these engines are nearing or beyond 20 years old. A lot also have high mileage, so normal wear and tear is normal. Fortunately, it seems many owners were able to resolve the hesitation problems by changing fuels or running a can of seafoam.

What exactly causes the problems is up in the air. However, it could just be deposits and build-up in the fuel system, on valves, etc. Quality fuels and special treatment fluids may help clean up the systems and get the Dodge Ram V10 running a bit better.

Similar to the other problems on this list, catalytic converter failure isn’t all that common on the 8.0 Magnum. However, as these engines shoot beyond 150,000 miles it becomes a little more prevalent. Catalytic converters can burn down inside over time which can cause them to clog and create a lot of backpressure within the exhaust system.

Most of these V10’s tend to run really cold which helps prevent this issue but the fuel injectors are known to need replacing at high mileage. A leaking fuel injector can lead to excess fuel being dumped into the cylinder which then makes its way to the exhaust system where it can combust and increase exhaust gas temps, causing the catalytic converter to melt.

Ultimately there are very few problems with these engines, if any. Cracked cylinder heads is a pretty rare and uncommon issue, it mostly affected some early years but was still uncommon. As it ages it will need its fair share of maintenance like spark plugs and ignition wires, injectors have a mild tendency to go at higher mileage, the catalytic converter and so on.

The widespread consensus is that the biggest problem on these engines is gas mileage. Outside of that they are pretty bulletproof and great for hauling toys.

A few more points, though. These engines are getting older, so a decent chunk of the V10’s are probably nearing the end of their service life. Age can also be just as tough on an engine as mileage as it can wear down wiring, plastics, etc. When newer, the Ram V10 8.0 was an excellent engine. There still sound to this day, but it’s always a guessing game on engines that are 20+ years old.

Ram 2500 and 3500 trucks offered a very compelling option in the 8.0L V10 engine. The power and torque were nearly unmatched in any other passenger pickup truck of the era. Not even diesel engines were far ahead, if at all. 310 horsepower and 450 torque available at low RPM’s made the Ram 2500 and 3500 V10 a tough competitor.

The specs for the Dodge 8.0 V10 were certainly impressive for the era. However, fuel economy is one area that leaves a lot to be desired. Most owners get about 11-13mpg without towing, and that quickly drops to single digits while towing. It may be a small downside for some, but the Ram V10 engines makes up for it with great reliability. Then again, the competition is tough with the 5.9 Cummins often regarded as one of the most reliable passenger truck engines in history.