This will be a pretty quick and simple article. Below is a chart showing the Ford Powerstroke horsepower and torque for all model years. This covers the 7.3, 6.0, 6.4, and 6.7 liter Powerstroke turbo diesel engines. At the end of the specs we will detail some of the major changes that led to the change in power and torque.

The Ford 7.3 turbodiesel was no slouch even back in 1994. Its 210 horsepower and 425 torque were very respectable numbers for that period. Ford and International kept up with the times and updated the 7.3 Powerstroke to eventually bring the figures up to 275 horsepower and 525 torque on manual versions. The 6.0L and 6.4L Powerstroke engines raised the bar higher.

However, all of the Ford diesel engines pale in comparison to the 3rd generation of the 6.7 Powerstroke. The specs for the 6.7L diesel are incredible. With 475 horsepower and 1,050 lb-ft of torque it has some serious capability. For reference, the Ford 6.7L diesel makes as much torque as some semi-trucks. Albeit, semi-trucks use much larger engines and offer the torque at slightly lower RPM’s. Nonetheless, it shows just how far the Powerstroke engines have come over the years.

Below we’ll quickly discuss each of the Ford Power Stroke engines along with some updates to increase horsepower and torque. 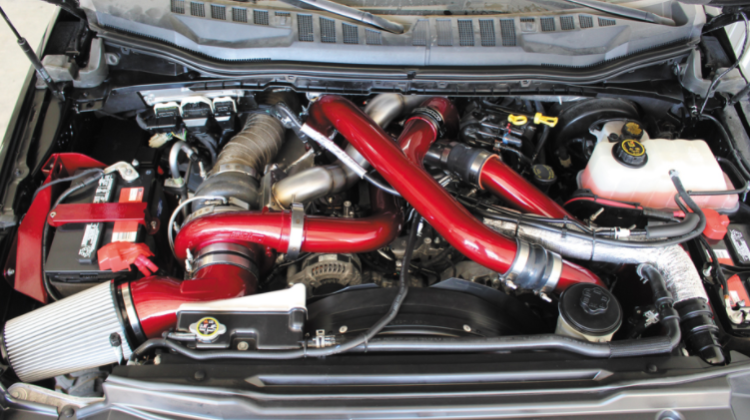 The Ford/International 7.3L turbodiesel engine made its debut in the 1994 F-250 and F-350. 7.3 Powerstroke specs and horsepower were great for the time period of its release. However, there are always areas for small improvements that can lead to big power and torque gains.

The Navistar International 7.3 diesel went through some minor updates and software tweaks in 1996 and 1997. This helped boost the turbodiesel engine to 215-225hp and 450tq.

In 1999, Ford 7.3 Powerstroke engines receive their first major update. An intercooler is added to help keep temperatures in check, which in-turn helps the engine make more reliable and consistent power. To support the power and torque increase Ford also made the move to higher flowing fuel injectors. In its final years the 7.3 diesel mated to a manual transmission made an impressive 275 horsepower and 525 torque.

*7.3L engines are often regarded as one of the most reliable passenger truck diesel engines in history. It was made prior to the days of strict emission parts, which are known to be problem areas on the newer Power Stroke’s (and many other diesel engines).

In 2003, Ford began phasing out the 7.3 diesel engine with the introduction of the 6.0 Powerstroke. Though the Powerstroke loses a whole 1.3L of displacement it still makes 325 horsepower and 560-570 torque. A solid increase over the previous 7.3L engine. Again, the specs are pretty solid for the era of the 6.0 even though it may pale in comparison to the newer 6.7L diesel.

There were no major updates to power or torque during the span of the 6.0 Power Stroke. Some small tweaks and software updates did occur to boost the engine to 570 torque from 560.

6.0L diesel engines came out during the era of stricter emissions laws. The engine did suffer from some common problems due to these updates. Unfortunately, it’s been a trend for diesel engines in general. A common term related to the 6.0 Powerstroke is bulletproofing, which includes a serious of repairs and upgrades to make them more reliable.

6.4L turbodiesel engines lived the shortest life of all the Powerstroke engine family. It only lasted 3 years and produced 350 horsepower and 650 torque for its whole life. There were no major updates to this engine during its quick run in the F-250 and F-350 trucks.

This is also the last Power Stroke engine made by International. It’s part of the reason the 6.4L diesel was so short lived as Ford began producing its own Powerstroke engine in house

The 6.7 Powerstroke engine from Ford offers impressive specs and horsepower. It’s been around for a while now and is now on its 3rd generation. Ford made some great updates to the 6.7 diesel engine to help improve reliability, horsepower, and torque. It was already a solid engine with 400 horsepower and 800 lb-ft of torque at its release in 2011. However, since then, Ford really took things to the next level.

2015 Powerstroke 6.7L engines saw updates to the exhaust, turbo, and fuel system. These updates led to an increase of 40 horsepower and 60 torque in the first year of the 2nd gen 6.7 Powerstroke. Some small updates and software improvements helped squeeze even more power out of the engine up through 2019.