Many 6.0 owners or prospective owners likely come across the term “bulletproof”. It’s not uncommon to see mention on forums or companies offering “Ford 6.0 Power Stroke Bulletproof kits”. The term is somewhat obscure with tons of varying answers as to what exactly it means to bulletproof the 6.0 engine. In this article, we discuss the idea of bulletproofing the Ford 6.0L Power Stroke. We’ll also provide some advice on the best ways to build a reliable 6.0 turbodiesel.

What Is A Bulletproof Ford 6.0L?

The term originates from the company bulletproofdiesel.com. They’re well known for building some great aftermarket parts for the diesel world. However, the term quickly caught on in the 6.0 Power Stroke scene. BulletProof Diesel does offer a few kits for the 6.0 Power Stroke aimed at improving the weak points of the 6.0L engine. Although, the term “bulletproof” more generically refers to upgrading the weak points of the Ford 6.0 to improve reliability.

In this post, we’ll mostly be focused on parts from the company BulletProof Diesel. There are of course plenty of other options out there. However, we’re narrowing it down to discuss which of the “bulletproof” upgrades are worth the cost on the Ford 6.0L diesel.

A few of the upgrades many consider part of bulletproofing the 6.0L Power Stroke include:

These are a few of the most problematic parts on the 6.0L turbodiesel engine. Some consider these to be the main “bulletproof” items. Some add in more stuff while others believe you should only do a couple of the above. Upgrading all 5 of the above items on the Ford 6.0 diesel can be pretty costly. Is it worth it to tackle all of them? What upgrades should be skipped?

We’ll discuss each of these upgrades throughout the post and provide advice on whether or not they’re worthwhile mods. At the end of the blog we also discuss a few other small upgrades some may consider. Let’s dive right in. 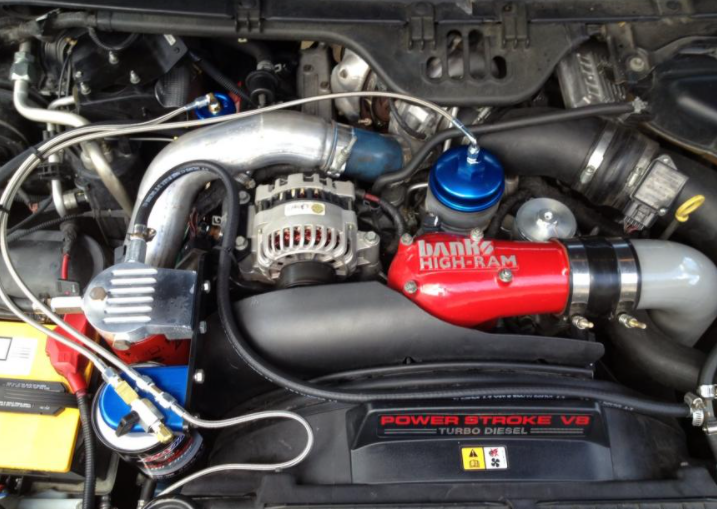 The 6.0 Power Stroke oil cooler can potentially cause a string of failures. Coolant passages may become blocked on the factory Ford oil cooler. This starves the EGR cooler, which may cause it to overheat and fail. When the EGR cooler fails coolant may enter the intake thereby creating high pressures that cause the head to lift. Point is – the Ford 6.0L diesel oil cooler is a serious reliability issue.

Oil cooler systems from BulletProof Diesel come in around $2,000-2,500. It’s not a cheap upgrade. The EGR cooler is also a problematic area regardless of the oil cooler problems. As such, it’s still a good idea to do the EGR cooler even if you’re upgrading the 6.0 oil cooler.

Is the Ford 6.0 Oil Cooler Upgrade Worth It?

We would probably skip the oil cooler upgrade unless you plan on keeping the Ford 6.0L for a long time. Install can run about $700-1,000 so the upgrade can cost upwards or beyond $3,000 all in. Compare that to a factory Ford 6.0 Power Stroke oil cooler for about $300. Add in labor and you can still replace the factory oil cooler about 3x before the bulletproof 6.0L oil cooler upgrade is worth the cost. Factory coolers usually hold up for about 60,000 to 100,000 miles.

It’s still a great upgrade for peace of mind. Those planning to keep their Ford for the long-run should definitely consider upgrading the oil cooler. Otherwise, simply replace it with the OEM Ford parts.

As discussed in the previous section, the EGR cooler is prone to failure. Some Ford 6.0 diesel owners opt to simply go with an EGR delete kit. It’s a solid option since you can pick up 6.0 EGR delete kits for under $100. However, there are some legal reasons to not delete the EGR cooler. You’ll likely fail an emissions inspection with an EGR delete. It will also set a check engine light, which will require a tuner to remove the CEL.

Yes, we believe the EGR cooler upgrade from Bulletproof Diesel is well worth the cost. If your EGR fails and you need a new one then we highly recommend going for the upgrade. However, if emissions aren’t a concern then an EGR delete kit is a good option too.

Water pumps are yet another common problem on the Ford 6.0L Power Stroke diesel engine. The OEM Ford 6.0L water pump features a plastic impeller prone to failing. You’ll usually notice a puddle of coolant under the truck when the pump fails. It will also cause the 6.0 to quickly overheat if coolant flow is lost.

Water pump upgrades from BulletProof Diesel use an aluminum impeller. They also upgrade the bearing assembly, seal, and housing. It basically knocks out all of the areas prone to fail on the factory 6.0 Power Stroke water pump.

Should You Upgrade the 6.0 Power Stroke Water Pump?

We would skip this upgrade for now if your Ford water pump is still functioning. However, if and when the water pump fails it’s definitely worth the upgrade. The Bulletproof 6.0 Power Stroke water pumps come in at $350. You might also consider their complete cooling system upgrade that knocks out all of the weak points with the 6.0L cooling system.

The Fuel Injection Control Module (FICM) controls the Ford 6.0L Power Stroke fuel injectors. Damaged FICM’s will cause the diesel engine to have trouble starting or not start at all. Other common symptoms include rough idle, stuttering, and power loss.

There are a handful of different options to go with. 6.0 FICM failures are often due to the power supply. However, Bulletproof and others offer full upgrades for the FICM. This includes the actual power supply upgrade with a new Ford OEM logic board.

Is the Ford 6.0L FICM Upgrade Worth It?

We’ll consider the Bulletproof 6.0 FICM option a toss up. The full upgrade runs around $800-1050, so it’s not cheap. Even the power supply alone runs $500. We recommend going for the TechSmart FICM power supply with an OEM cover. At $230 it’s a much better price that won’t break the bank.

We’re circling back to the first topic of oil coolers here. The 6.0 head lifting isn’t really an actually manufacturing defect with the head, gaskets, or head studs. Rather, it was a chain event of the oil cooler failing. This leads to failure of the OEM 6.0L Power Stroke EGR cooler, which can cause the head to lift.

Basically, the head and head studs aren’t the problem here. Make sure you upgrade to the bulletproof EGR cooler or delete it. If this is done the head studs should not be a concern.

Skip the ARP head studs on the 6.0L diesel. The ARP studs come in around $500, but labor is pretty intensive. If you’re in there anyways then it can’t hurt to upgrade the 6.0 head studs if you’re willing to spend on the parts. Otherwise, we’ll skip this upgrade.

We wrote about a post here regarding the most common problems on the Ford 6.0 Power Stroke engine. It’s still not a totally exhaustive list. However, there are a few other problems on the Ford 6.0L that aren’t considered a normal part of bulletproofing. As with several of the things on this list, it’s probably not worth it to replace this parts preventatively.

Simply knock out the repairs as they pop up and upgrade when and where it makes sense. A few other upgrades to consider include:

Again, we wouldn’t go out and upgrade these 6.0 Power Stroke parts unless they fail. We’re just pointing out that there are many upgrades available. If the price is right then upgrade Ford 6.0L parts as they fail.

Ford 6.0 Power Stroke engines didn’t earn the best reputation for reliability. They suffer from quite a few common problems; many of which are due to emissions requirements. Nonetheless, the Ford 6.0L diesel can be a reliable engine. The idea of bulletproof mods took off in the 6.0 world and it became a common term. However, Bulletproof is really a company that makes tons of great upgrades for the Ford Power Stroke engines.

A few popular upgrades to build a bulletproof Ford 6.0 include the oil cooler, EGR cooler, water pump, FICM, and head studs. The bulletproof 6.0L Power Stroke EGR cooler or delete is a great start. However, most of the upgrades don’t make sense to do up front. Simply knock out any upgrades possible – assuming the budget allows – when actual problems pop up.

What’s your experience with the 6.0 Powerstroke? Do you have any bulletproof mods?