The 7.3 Godzilla is actually the first pushrod V8 produced by Ford in over 20 years. Instead of building the engine off of the modular Coyote platform, Ford went back to its old roots with the cam-in block pushrod design.

Producing 430hp and 475lb-ft. of torque, the power numbers are quite modest given the engines size. However, these numbers seem to be underrated from the factory and big power can be made with some simple bolt-on modifications. 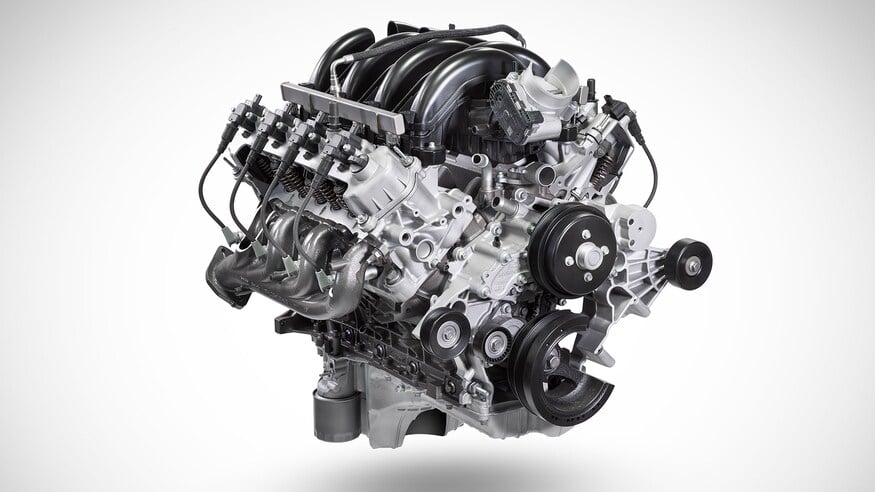 These engines are generally very similar from a performance, reliability, and gas mileage perspective. Hence the relatively cheap cost of upgrading to the 7.3. Overall, the 7.3 delivers a bit more power and is also slightly more power-capable. It has a higher tow rating on the high end to the tune of about 4,500lbs.

With respect to reliability, the 7.3 Godzilla is very new and therefore has not been around long enough to provide any solid data points on reliability. The 6.2 however has been in use since 2011 and has proven to be a reliable and durable engine capable of lasting beyond 300,000 miles.

Overall: if you need the slightly higher performance and towing capabilities, the 7.3 Godzilla is the best choice. If you do not do a lot of towing and are looking for a more “proven” engine, the 6.2 Boss is a great option and saves a few bucks. Both have some significant performance potential but overall the 7.3 gas is going to offer more power potential.

The 7.3L Godzilla engine was launched in 2020 which doesn’t give us many data points with respect to “common” problems. All of these engines are still under warranty but we haven’t seen anything catastrophic with them so far. Based on the engineering of the block and internals we don’t expect any problems with major engine components.

Ford acknowledged the issue and stated it was a manufacturer defect. Their 3rd part manufacturer has fixed the faulty wiring issues and the new harness can be grabbed from the dealership under warranty if symptoms exist.

Outside of the known spark plug issues, there aren’t any other “common” problems we’ve run across. There have been a few owners with stuck lifters and cylinder scoring, but these appear to be isolated issues. Outside of a handful of engines that have experienced catastrophic failure the 7.3 Godzilla seems to be reliable and strong.

At 7.3L, the Godzilla is almost underpowered with only 430hp. With that being said, the engine is capable of producing significantly more power. And it is believed to be slightly underrated from the factory. Ford is selling the 7.3 as a performance crate engine which is a pretty good sign that the block and internals are capable of significantly more power than they are producing.

The forged crank, iron block, and six-bolt mains all point towards solid power capabilities. While initial performance testing is still underway, tuners think that the 7.3 Godzilla can reach 900whp on the stock block and heads without sacrificing complete reliability.

Additionally, performance enthusiasts have already reached the 600whp mark on basic bolt-on modifications. We have seen near 800whp without forced induction but a handful of more significant upgrades. A 7.3 with forced induction has hit 1100whp on a twin-turbo setup, more impressively while still on the stock camshaft, rods, and pistons.

Overall, it appears that the stock block, heads, and internals are capable of 1000whp. While no one has been running a setup this aggressive for long enough to tell how reliable it is at these levels, there is no doubt that this is a capable engine.

The Godzilla is still within its first production year which means there are going to be problems. Fortunately, with these engines still under warranty most of these problems will be addressed free of charge and used to improve upon the engine in later years.

While there have been a handful of complete engine failures recorded, we believe these to be anomalies. We expect the 7.3 godzilla to be a strong engine capable of surpassing the 300,000 mile mark and maintaining reliability under heavy towing.

From a block and internals perspective, we don’t anticipate any major issues here given the stoutness of these components and the power we have seen them create. While we aren’t sure how reliable these engines are with significant modifications, we are confident in their ability to reliable produce some serious numbers given current testing.

What problems have you experienced so far with the 7.3 Godzilla?

Note these are 2021 numbers, 2020 numbers might vary by a few hundred pounds in each direction. Also just worth noting that the numbers below do have variances as it depends on the packages, tire sizes, etc.

At 7.3L you shouldn’t expect any stellar gas mileage numbers. We are seeing gas mileage in the 8-9mpg range while towing (depending on tow weight), and around 12mpg for a mix of city and highway driving.