The Ford 7.3L Power Stroke diesel is a legendary engine. It’s well known for its reliable history and solid performance from the factory considering the era it was released. However, there are many ways to get more performance out of the 7.3 turbodiesel Power Stroke engine. Of course, risks exist when upping the boost and power with engine upgrades. In this article, we discuss a few of the best 7.3 Power Stroke bolt-on mods along with a few of the risks and other considerations. 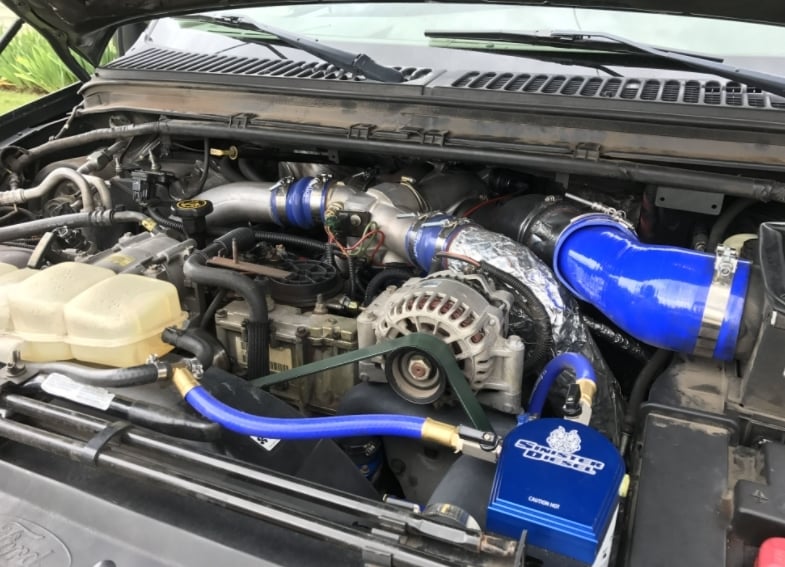 We’ll dive into each of the 7.3L Power Stroke bolt-on mods throughout the post. These are typically the starting point for getting more power and performance out of the 7.3 diesel engine. The above list represents power upgrades that can directly improve the 7.3’s HP. However, adding power can expose newfound issues. If you want a reliable build it’s important to either keep things modest or spend the money on supporting mods.

We will also talk about these mods towards the end of the article. This isn’t a totally exhaustive list and building out the 7.3 Power Stroke for lots of power can get pricey. We’ll be quick on these sections when we circle around to the above mods. It’s more a reminder that increasing power and performance can put a lot of stress on other parts like the fuel system, engine, transmission, etc.

Intake upgrades are a great addition on almost any engine. However, this is especially true for the 7.3 Power Stroke turbodiesel. Turbos move a lot of air and a performance intake mod helps the 7.3L engine keep up with demands. Air intake upgrades are often referred to as cold air intakes, performance intakes, intake kits, etc. They’re all similar in design and accomplish the same result – getting more air into the engine.

Power gains with an intake come in around 5-15hp and 10-30tq. That’s already pretty enticing. Even more so when you consider Ford 7.3 PowerStroke intakes are cheap and simple to install, too. It’s hard to go wrong with a 7.3L intake upgrade.

This is simply a short list of some of the best 7.3L Power Stroke intake mods on the market. There are tons of great options out there. Look for something with a large, quality air filter. Otherwise, you can shop for price or design as intake upgrades are pretty straight-forward.

Exhaust is another simple, basic bolt-on upgrade for the PowerStroke 7.3. One of the main ways to increase power is to get more air into the engine as efficiently as possible. However, that air also has to exit the engine efficiently. That’s where 7.3L Power Stroke exhaust mods come into play. An exhaust system will reduce back-pressure which helps increase power and reduce turbo spool time.

A catless turbo-back exhaust will offer the best performance gains on the 7.3L turbodiesel. However, there may be emissions concerns in removing the catalytic converter. High-flow catted exhausts for the 7.3 Power Stroke will also offer respectable gains. Catless is the definite way to go if power and performance are the end goal, though.

Expect power gains around 5-15 horsepower. You’ll also notice a solid drop in EGT’s alongside the quicker turbo spool. An exhaust is definitely among the best bolt-on mods for the 7.3L engine.

As with intake mods, this is simply a short list of Ford 7.3 exhausts that we believe offer a great balance of price, quality, and performance. Tons of great options exist. Look for a stainless steel exhaust if you want top quality. Aluminized is a great option too, but some may begin having problems after 5 years or so. Sticking with a 4″ exhaust is also a good idea. Otherwise, simply check out some sounds and prices and see what’s the best balance for your goals.

Tunes likely offer the best bang for the buck on the 7.3L Power Stroke diesel engine. You may also see 7.3 diesel tunes referred to as chips, programmers, or modules. They also allow you to get the most out of other mods, such as the intake and exhaust upgrades. If you’re planning to do just one engine mod on the 7.3L engine then a tuner would definitely be our recommendation. A tuner for the 7.3 Power Stroke allows the engine to make more boost.

7.3L Power Stroke engines also have the option to opt for custom tunes. Custom tuning options require the use of a flash device like the SCT X4. However, the custom tunes are an extra cost and dial in the tune to your specific 7.3.

There’s a lot that goes into a proper tune, so we recommend sticking with a reputable, well-known product. The above three are solid starting points, and other good options exist. If you’re looking for the best performance then eventually a custom tune is the way to go. However, if you’re new to tuning and modding the 7.3L PowerStroke it’s best to start with a basic off-the-shelf tune.

Turbo mods for the Ford 7.3L diesel are getting into slightly new territory. Intake and exhaust mods are simple bolt-on that offer solid performance for the price. Tunes offer excellent bang for the buck and are essential in getting the most out of your engine. 7.3 Power Stroke turbo upgrades have the ability to take the engine to to totally new heights.

We’ll likely have an upgraded turbo guide coming in the future. In the meantime, we’ll keep this section pretty short (relative to how much goes into turbo upgrades). We recommend doing quite a bit of research prior to upgrading the 7.3 PowerStroke turbo.

Moving on, there are tons of different options for turbos. You can keep things modest and go for a minor turbo upgrade. Or you can shoot for the moon and buy a turbo kit capable of 500+ horsepower. Push things too far and the engine, transmission, etc may not last long.

The stock injectors typically max out their fuel flow in the 325-375 horsepower range. You can hit those numbers pretty quickly with an aggressive tune and some basic bolt-ons. Anything much above that ballpark and 7.3 Power Stroke injector upgrades become a must. Costs vary some based on model year and how much flow you need from injector upgrades. However, you’ll likely be shelling out somewhere in the $1,000 to $3,000 ballpark.

It’s not cheap. Injectors are a great example as to why the 7.3 diesel can get expensive to mod heavily. A tune and basic bolt-ons is a good stopping point for most. Going much further may start to add a lot of money.

The automatic transmission has a few weak points once you begin modding the 7.3 turbodiesel engine. When you upgrade the transmission depends on a few factors. The 7.3L Power Strokes are getting old so some transmission may need rebuilding anyways. That would be a good time to knock out some upgrades.

Otherwise, it’s generally around the 350-400 horsepower mark where the transmission reaches the limit. Again, we’re right in that area where taking the 7.3 any further gets expensive.

Once you start adding mods to the Ford 7.3 it’s a good idea to pick up a set of gauges. This will help you keep an eye on some important parameters. A lot like to start with gauges that show trans temp, turbocharger boost, and EGT’s. Plenty of other options exist so the sky is the limit. Stick with the important gauges, though. Unless you want to find yourself with a dozen gauges lining half the interior.

We skipped over a few mods that may also be considered power mods. An intercooler is a great addition to the Ford 7.3L Power Stroke engine. However, intercoolers can get pretty expensive. Some opt for the 6.0L Power Stroke intercooler. Used ones can often be found for a reasonable price. Otherwise, an intercooler upgrade can run $1,000+. It’s definitely a great mod to keep charge air temps down and help EGT’s, too.

The list goes on and on. We’ll expand on some more mods in the future for more in-depth builds. Most are probably best off starting with the basics like a tune, intake, exhaust, injectors, and gauges. Once you’re ready to start pushing things further then you should have a solid understanding of what’s required.

Ford’s 7.3L PowerStroke engine has earned itself a legendary reputation. It’s a great engine that’s still powering tons of trucks even 16-25 years later. They make solid power from the factory. However, some basic bolt-on mods can really wake up the 7.3L diesel and help boost it to the next level. It’s important to keep in mind these trucks are only getting older. Adding power may expose other underlying issues or weaknesses.

Nonetheless, a tuner, intake, and exhausts is a great starting point to unlock more power from the 7.3L with simple bolt-on mods. Those looking for more power may consider turbo upgrades. Though, once you begin nearing or passing the 350 horsepower ballpark the costs can add up quickly. You’ll want to consider supporting mods like injectors and transmission upgrades. Too much power also puts a lot of stress on the engine and may reduce longevity and reliability.

Are you running any mods on your 7.3L Power Stroke? Which are you considering?