The 7.3 PowerStroke is often considered among the most reliable diesel engines of all time. It certainly helps that the 7.3L V8 diesel was built before the era of endless emissions technology. However, no engine is perfect and there aren’t any exceptions here. Ford’s 7.3 PowerStroke is still prone to its share of problems and among them is IDM failure. In this article, we discuss 7.3 PowerStroke IDM operation, failure symptoms, fixes, & more. 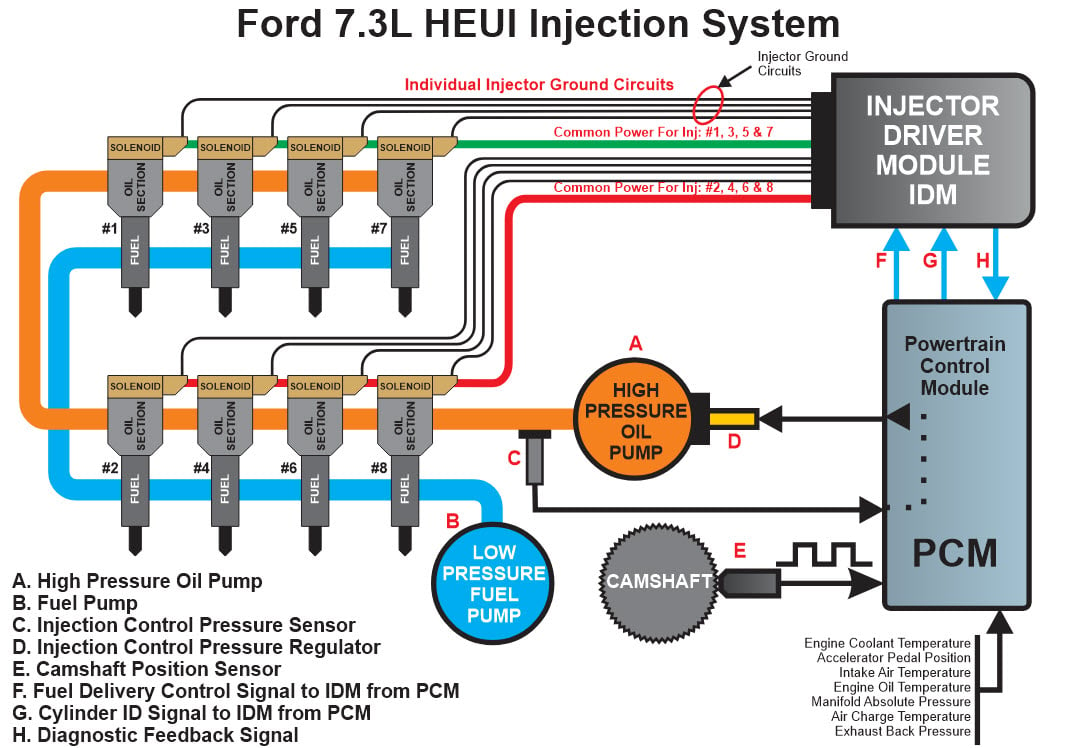 What is 7.3 PowerStroke IDM?

IDM stands for the Injector Driver Module. The Ford 7.3 PowerStroke uses Hydraulically actuated Electronically controlled Unit Injectors – commonly known as HEUI or HUEY. Instead of using a high-pressure fuel pump, fuel pressure is achieved via high pressure oil. This is done with a poppet valve inside the injector and allows the 7.3L diesel injectors to achieve injection pressure of 20,000+psi. These poppet valves are then electronically controlled by a solenoid mounted on each injector.

Now, since the pressures are so high the solenoids require a considerable amount of power. The 7.3 PowerStroke needs about 115 volts and 8 amps to operate the poppet valves. It’s more power then the PCM can provide on its own, which is where the IDM comes into play. In essence, the IDM supplies high voltage to the solenoids to turn the injectors on and off.

How Does the Injector Driver Module Work?

The 7.3 PowerStroke IDM operates closely with the PCM to control the fuel system. It’s the job of the Powertrain Control Module to determine the injection timing. Therefore, the PCM sends a signal to the IDM to tell it when to trigger the fuel injection. It then sends an ID signal back to the PCM.

Since the 7.3L diesel is a V8 is has two separate banks which each include 4 injectors. The IDM has two power feeds – one for each bank. When it sends power to the bank it also grounds the specific injectors ground circuit to fire that specific injector.

Diving into the specific details of IDM gets complex, and our main focus here is on IDM failures & symptoms. As such, we’ll leave it short and sweet for the operation. The above image paints a good picture of the 7.3 PowerStroke HEUI injection system.

Some symptoms of Ford 7.3L PowerStroke IDM problems include:

When the 7.3 PowerStroke Injector Driver Module fails it can cause a myriad of symptoms. Ultimately, the IDM controls the fuel injectors and when it fails the cylinders won’t receive the proper amount of fuel. The injectors may fail to deliver fuel altogether or fuel is injected at the wrong times or amounts. Improper fuel flow is bound to lead to numerous symptoms and drivability issues.

Is it even possible to drive the truck with IDM failure? The above 7.3 PowerStroke IDM failure symptoms assume the engine will even crank over and run. However, depending on the exact IDM issue the diesel engine may not even turn on. In other cases, it may turn on and seem drivable at first.

Ultimately, the safest option is to avoid driving until the IDM problems are solved. IDM failure symptoms may also include stalling or the engine turning off and then quickly turning back on. These symptoms are common when the IDM is sending varying power flow. One moment the Injector Driver Module is operating sufficiently and then the next moment it isn’t.

Point is – issues can be a safety hazard even if the truck seems to be running OK for the most part. You likely don’t want to get caught in dangerous situations if the engine suddenly stalls and shuts off.

Below are some frequently asked questions relating to Ford 7.3L PowerStroke IDM failures. Some of this may have already been covered in the bulk of the article above.

One of the most common causes of 7.3 PowerStroke IDM failures is water intrusion. The IDM case has an air vent which is what can allow water into the case and damage the IDM. Unfortunately, the vent is important to have so don’t plug or block the air vent.

Wiring issues between the IDM unit and fuel injectors is another commonly problematic area. The wiring is exposed to hot temperatures and connectors can become brittle and break down with age. This is especially common now days considering the Ford 7.3L diesel is 20+ years old.

How Expensive is a 7.3 PowerStroke IDM Replacement?

Replacing the 7.3 PowerStroke Injector Driver Module is about $400-600 assuming it needs to be fully replaced or remanufactured. However, you may be able to fix the issue for much less expensive. It’s possible to open the IDM and simply replace whatever is causing the issues, but it depends on the extent of the failure and the exact cause. Check out the below video for more info:

Could My Issue Be Injector Related?

The 7.3 PowerStroke IDM failure symptoms can also be symptoms of other failures. It’s certainly possible you’re running into other fuel system, air delivery, or ignition problems. Don’t just blindly replace or take apart the Injector Driver Module without further diagnostics. Fault codes can help point you in the right direction, and always check the basics before jumping into more expensive repairs like the module.