The legendary 7.3 Power Stroke Diesel engine, when properly maintained can provide years of trouble free service. However there are several common problems that can develop over time. Generally speaking these can all be resolved relatively easily. Listed below are 9 common problems of the 7.3 Liter Power Stroke Diesel engine. We then dive into each of the common faults on the 7.3L diesel engine with some symptoms and fixes. 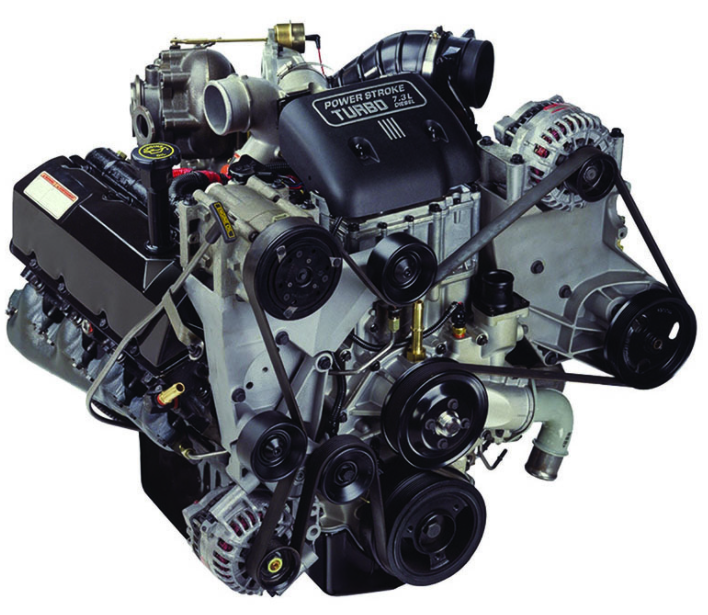 If you would rather consume this content via a video, check out our 7.3 Powerstroke Common Problems video below or on YouTube:

These faults and failures aren’t in any specific order. Below we dive into each of these 7.3 Power Stroke problems and discuss symptoms and fixes. It’s also important to note – the Ford 7.3L Power Stroke diesel engine earns high remarks for reliability. They are great engines, however problems can and do occur. Fortunately, most issues with the 7.3 Power Stroke are relatively simple, cheap fixes.

The Injection Pressure Regulator (IPR) Valve, located in the valley on the High Pressure Oil Pump (HPOP). These can stick, seals get damaged, have the sensor go bad or the wires get damaged. Locate the IPR Valve, check for loose or damaged wires, check that the tin nut on the back of the IPR sensor is tight. When reinstalling the IPR unit torque the IPR to 35ft/lbs and do not use sealer on the IPR threads, as there is an orifice in the threaded area which the sealer could plug.

Injector Driver Module (IDM) – located on drivers side fender. These can go bad or get damaged from water and will cause a no start or rough running and cut outs in revving/rpm. Check for damaged wiring, moisture or water intrusion.

A faulty 7.3L Power Stroke CMP can cause the engine to cut out and eventually die. This may make it not start until it sits or is reset on the batteries. There is an easy way to make sure yours is good. On the Old Body Style (OBS), check if your tachometer moves while cranking. If it does your 7.3 PowerStroke cam position sensor is good. If not then you should replace it. Cam position sensors may be the most common problem on the 7.3L Power Stroke.

Cost $24-$70. Don’t buy the generic sensors from any parts store, get an OEM Cam Position Sensor, part number F7TZ-12K073-B, because some aftermarket CMPs can be defective out of the box. Keep a spare in your glove box.

Under Valve Cover Harness (UVCH) Connectors are another common fault on the 7.3 Power Stroke. When these come loose or get shorted they can cause rough running conditions to the point where the truck sounds like it has 17* timing and it lopes bad and will often die and sputter. Since these are under the valve cover it’s a good idea to replace the valve cover gaskets.

An easy way to fix this or check for it, there are four connectors on your block / heads that are under the valve covers unplug them and check for cut wires, loose or burnt connectors, if they are burnt or damaged, replace them. It’s a simple fix. The entire valve cover gasket kit with connectors, part number F81Z-6584-AA, can be replaced for $100 or less.

Clogged fuel filter. A restricted fuel filter will often cause long cranking or a semi-loss of power, if the injectors can’t get the fuel they need. Replace fuel filter. Part number F81Z-9N184-AA. Replacement cost $9-$30.

Lift pump failure, this will definitely cause a no start. One way to rule this out is to check the fuel bowl for fuel before and while cranking. If no fuel is in the fuel bowl, fill the bowl up with clean fuel and if it starts replace the pump. Part number F81Z-9C407-AC. Replacement Cost $125-$320

Overheating is a general issue the 7.3L Ford Power Stroke engine runs into. This could be related to the radiator, thermostat, water pump, cooling fan or bad coolant. Signs of overheating should be easy to pick up on. It’s important to stop driving the truck until the overheating problems are resolved on the 7.3 Power Stroke. Look for the basics like any visible coolant leaks from the 7.3 diesel engine.

Injector control pressure (ICP) sensor. Causes the engine to run, but cut in and out and really roughly throttle. Check for oil in the ICP connector, if present, ICP is bad or on the way out. You can verify better running by unplugging the ICP sensor, temporarily, to see if the issue goes away.  Cost $65-$167. Part number F6TZ-9F838-A.  If oil has permeated the wires, It is recommend to replace the ICP sensor pigtail as well.

Fuel heater. – The fuel heater can short out and blow maxi fuse #22, disabling the PCM. Disconnect the fuel heater, replace fuse, re-try start. Replacement cost about $3 for the fuse. Always carry spare fuses, including maxi fuses, in the glove box. They’re cheap and easy to replace. Don’t let such a cheap part leave your 7.3 PowerStroke stranded.

How Reliable is the Ford 7.3 Power Stroke?

Overall, the 7.3 Power Stroke is a reliable engine. It has its fair share of common issues, however they’re pretty minor problems in the grand scheme. Ford 7.3L diesels are also getting pretty old. As such, most potential failures are fair game given the age and mileage.

Nonetheless, the 7.3 PowerStroke has a B50 life of roughly 350,000 miles. In other words – about 50% of these 7.3L engines last longer than 350,000 miles. That’s pretty respectable even among diesel engines that are known to outlast gasoline engines. Ford 7.3L diesels are strong internally and have what it takes to last.

They aren’t perfect by any means, but no engine is. 7.3 Power Strokes definitely earn above average remarks for reliability. Maintain the engine well and it will reward you with a great overall experience.

Ford’s 7.3L Power Stroke is known as a legendary engine for good reason. We believe it’s one of the best diesel truck engines around. However, the 7.3 Power Stroke is prone to its fair share of problems and failures. The above list of 9 problems certainly isn’t exhaustive as other things can go wrong. This is especially true considering 7.3L PowerStrokes on the road today are 15+ years old.

Fortunately, the vast majority of 7.3 issues are pretty simple, cheap fixes. It’s a good idea to carry some spare parts around in the glove box. This may help you from becoming stranded. Anyways, many 7.3L Power Stroke engines have no trouble eclipsing 350,000 miles. That’s enough to consider this engine a reliable work horse.

What’s your experience with the 7.3L Power Stroke? Are you considering one?