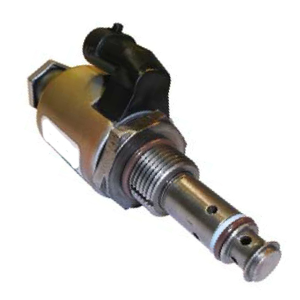 A Power Stroke engine utilizes an electromagnetic spool valve, to regulate the HP oil pressure on the engine to tailor the injection characteristics of the injectors. This valve is called the Injection Pressure Regulator or IPR.

IPR valves are generally trouble free, but they have been known to become sticky if debris enters the valve or if it suffers from a damaged O Ring. A key indicator of a bad IPR valve is low injection pressure.

Symptoms of a bad 7.3 Powerstroke IPR can range from running very rough to a no start situation. The symptoms can sometimes feel like you have multiple bad injectors, among other things. You can easily and inexpensively resolve this problem.

The IPR is a pulse-width modulated valve operating at 400 Hz. The pulse width is modulated from a duty cycle of 8 to 50% to control injection control pressure from 3.4-20.7 MPa (500-3000 psi). The IPR is mounted in the high pressure pump (HPOP) and achieves injection control pressure regulation by discharging excess oil through a shuttle valve into the front cover and back to sump.

The PCM controls the injection pressure regulator (IPR) by an internal ground switch (low side driver) internal to the PCM. Pressure control is a variable function of the engine control strategy and the calibration that has been programmed into the PCM.

The portion of time during which the 7.3 Powerstroke IPR is active. In a Hydraulic Electronic Unit Injector (HEUI) system, it’s often given as a percentage and is a vital to monitor during diagnosis or performance applications to ensure the high pressure oil pump is keeping up with oil demand.

With a little care and the right tool, an IPR valve can be removed from a 7.3 PowerStoke engine in minutes. The IPR is located on the back of the high pressure oil pump (HPOP), which is located under the fuel filter assembly, down in the “V” of the engine. The IPR valve has been largely unchanged since its introduction in 1994.

If one could find a deep enough socket, it could be used by itself.

The easiest way to remove the IPR valve is to build a special IPR removal tool. Some Ford dealerships remove the HP oil pump to change/service the IPR. With this tool, it can be done in minutes.

Said tool is comprised of a 1/2″ 29mm drive deep 6 point or 1 1/8″ socket with a 4 or 5 inch piece of 1″ flat steel welded across the back of it. Ordinarily one would just use a deep socket, but the IPR is too long for some of the deep sockets. Using a 1/2″ drive socket will allow the end of the IPR to go where the ratchet stub would have. Furthermore, there isn’t much room between the back of the HP oil pump and the front of the turbo assembly, so the thin flat steel increases the available room.

a) To remove the IPR, first find it. The easiest way to do this is to trace the wires from the ICP on the driver’s side HP oil rail into the main harness and then out to the IPR deep in the engine “V”. You can identify the IPR by its shiny gold colored solenoid. (The ICP and the IPR are not connected, but the wires for both leave the harness at the same point.)

b) Unplug the wire from the solenoid. To do so, you need to flip the connector bail down and pull the connector out. It should come out relatively easily.

d) Using the IPR wrench described above, place it on the IPR with the flat iron towards the driver’s side oil rail. Tap the flat iron with a small hammer towards the rail and the plug should loosen. Give it a few twists with the wrench and then use your hand to turn it out entirely.

e) Removing the IPR will allow most of the HP oil reservoir to drain out into the engine “V”. You can prepare for this by suctioning out the oil from the HPOP reservoir through the reservoir plug or by placing rags or a bunch of paper towels in the engine “V” to absorb the resulting oil. It may also be handy to know that a plastic champagne cork fits nicely in the IPR thread and will keep the oil from leaking out.

Once removed, you will have an IPR similar to the one in the picture, without the solenoid.

An IPR is a fairly robust yet intricate item. They are easy to service, but they can be damaged.

To service the unit, first separate the pilot valve from the actuator. To do this, place the IPR in a vice. Then, use a sharp, good quality pipe wrench or similar tool to firmly grab the pilot valve body. (See picture). DO NOT ATTEMPT TO SQUEEZE THE PILOT VALVE BODY TIGHTLY IE IN A VICE OR IT WILL CRUSH AND BE RUINED.

A decent working pipe wrench works well. I’ve opened many IPRs this way without damaging any. The pilot valve slides on the inside of the body, so if it is crushed, it will stick and not work well.

Once loose, the body will separate easily. However, there is a tiny needle in between the body and the actuator that MUST NOT BE LOST.
(See IPR Disassembly Picture for a view of the pin.)

Normally this pin stays in the end of the body because of the oil that is present, but it has been known to come free. DO NOT LOSE IT.

Once the pin and the internal screw is removed (guide actually), shake the actuator body firmly up and down several times to get the piston out.

The IPR is now fully disassembled. It is possible to disassemble the pilot valve itself, but this takes a press and jigs to do it properly.

Assemble the actuator end of things. Gently tighten the internal screw (guide). Don’t over tighten this.

If you removed oil from the HPOP, be sure to replace it with clean oil, bring the oil level to withing an inch from the top of the HPOP reservoir, about a quart should do it. Replace resevoir plug. You’ll need to drive the truck to purge any air from the HP oil system and clear any codes set prior to the replacement. Check it for tightness of the IPR nut after a few hours of use.

As a note – Ford says that 7.3 Powerstroke IPRs are not serviceable. They don’t/won’t service them. They rarely give trouble except for debris build up in the valve or actuator.