The Ford 6.6 and 7.8 diesel engines are medium duty truck engines primarily used from 1985-1994. They were popular in B series buses along with the F-600, F-800, and F-900. Ford 6.6L and 7.8L diesel engines are officially the Ford-New Holland engines and may also be known as the Ford “Brazilian” diesels. The Brazilian diesels are durable and reliable, but the lack of power is evident. In this article, we discuss some Ford 6.6 diesel and 7.8 diesel history, specs, performance, and problems. 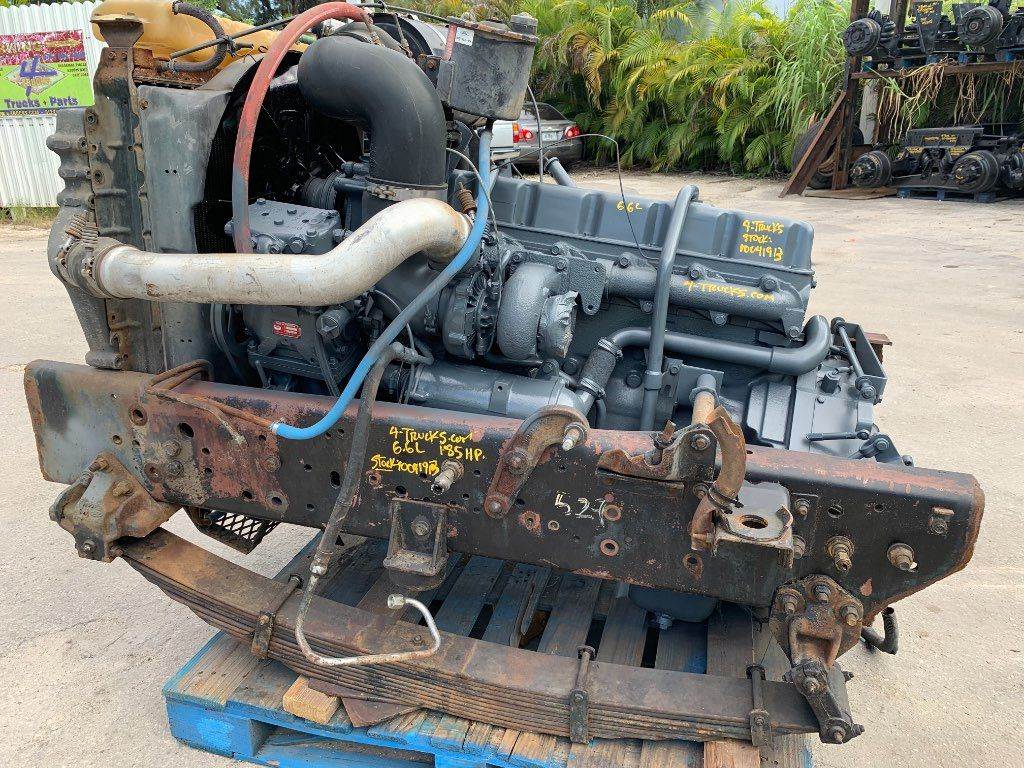 New Holland has deep roots and a lot of history in the agricultural industry. The company was founded in New Holland, Pennsylvania in 1895. In 1986, Ford officially acquired the company and formed Ford New Holland Inc. New Holland had been building naturally aspirated 6.6L and 7.8L diesel engines since the 1960’s.

Following the Ford-New Holland brand, they continued building these engines but adapted them to be turbodiesels. The engines were built at New Holland facilities in Brazil – hence the Ford Brazilian diesel nickname. Ford also offered Cummins, Caterpillar, and Detroit engines alongside the Ford-New Holland engines in medium-duty trucks. After 1994, the 6.6 and 7.8 diesels were replaced with more powerful and advanced engine options.

Specs for the Ford-New Holland Brazilian 6.6 and 7.8 diesel engines are as follows:

Ford 6.6L and 7.8L engines are a part of the same engine family so they share a similar design. Both are inline-6 turbodiesel engines with Bosch mechanical fuel injection. Most Ford 6.6 diesel and 7.8 diesel engines came with a turbo. However, some were available in NA form for use in agriculture.

Power and torque were pretty low for these engines. Even the much smaller 5.9 Cummins delivered up to 230hp and 440 lb-ft of torque, which was a direct competitor for the Ford-New Holland engines. Those power figured bested the 6.6L by a large margin.

By now, the Ford 6.6 and 7.8 diesel engines are 28-35+ years old. There are a dwindling number of them still in use and that kind of age can take a toll on any issue. As such, most of the issues with the Brazilian 6.6L and 7.8L diesels are related to age and availability. In the next couple sections we’ll talk about the following issues:

Overall, these diesels are well respected and considered durable and reliable engines. We haven’t seen too many major or common problems with the Ford 6.6 diesel or the 7.8L. However, the old age certainly means they’ll need a bit of extra TLC to keep them on the road (or farm).

The first issue with the Ford-New Holland diesel engines isn’t even a true fault or problem with the engine. Instead, one big complaint is that the 6.6L diesel has a lack of power. They still have just enough power to get the job done and hold steady speeds on the highway. With the exception of very steep mountains where they’ll struggle a little bit with heavy loads.

Ultimately, the Brazilian 6.6 fuel pump can be turned up to squeeze out some extra power. Afterwards, you’ll need a bigger turbo and a couple of other tweaks to get much more. This extra bit of power can go a long way in getting the 6.6L to feel much less of a dog.

Lack of power shouldn’t be a major concern in flat areas or places with modest grades. Nonetheless, the lack of power is one of the biggest complaints when it comes to the 6.6L diesel. The Ford 7.8 Brazilian diesel is better but still a little underwhelming for a pretty large 7.8L engine.

Another common complaint with these diesels has multiple pieces. Some complain about the more complex nature of maintenance and repairs compared to other similar diesel engines. For one, the Brazilian 6.6 and 7.8 do not have wet sleeves which makes rebuilds a bit more of a hassle. Otherwise, certain parts can just be harder to access and replace.

The next piece related to the fact these engines were built in Brazil for a relatively short period. Parts can be harder to come by than engines like the 5.9 Cummins. However, there were tons of these Ford 6.6/7.8L diesels on the road so parts shouldn’t be too tough to track down.

That said, they’re 25+ year old engines which means parts are truly becoming harder to find. You can still find a number of parts online at places like JenSales. Otherwise, local junkyards may have some parts or spare engines lying around.

Lastly are oil leaks from the Ford 6.6 diesel and 7.8 diesel. 20 years ago it probably wouldn’t be fair to consider oil leaks a common problem. There aren’t really any design flaws or issues that cause oil leak problems. However, with the age of these engines there are surely a number of worn gaskets, o-rings, seals, etc. that are prone to leaks.

Oil pan gasket leaks seem to be one of the most common oil leak areas. Also check the Ford 6.6 diesel oil cooler as those are known to leak sometimes too. Ultimately, the point of this section was to point out these older engines need a bit of extra care. Rubber parts, gaskets, seals, and similar parts are prone to degrading with age and mileage.

The Ford-New Holland 6.6 and 7.8 diesel engines came out in 1985 at the time of the New Holland and Ford merger. New Holland had been building a similar 6.6L and 7.8L engine since the 1960’s. However, Ford came it and made a version adapted for turbocharging and additional power.

Ford 6.6 and 7.8 diesel engines are known to be pretty underpowered, though. That mostly applies to the 6.6L engine which commonly only offered 170 horsepower. It’s good enough to get the job done but if you’re climbing steep grades or need more speed then a few mods can go a long way.

Despite the lack of power, the Ford 6.6L and 7.8L are still desirable for their great reliability and durability. The diesels don’t run into many problems or failures. Some complain about the complexity of working on them and the lack of parts, though. Otherwise, they’re older engines so look out for the basics like oil leaks and other age related issues.