Following continued increases in emissions regulation, the T444E engine was retired in 2003. Navistar’s replacement for the 7.3L engine was the VT365 which was known as the 6.0 Powerstroke in Ford vehicle applications. Navistar continued producing the Powerstroke engines for Ford until the end of 2010, when Ford brought the design and engineering in-house with the 6.7 Powerstroke. Navistar also manufactured the 6.4L diesel engine, which was known as the MaxxForce 7 in non-Ford commercial applications.

While the engines utilize the same design and major engine components, there are a few differences. This article is going to outline the specs for the Navistar T444E engine, discuss the differences between it and it’s 7.3 Powerstroke relative, and cover reliability and common problems. 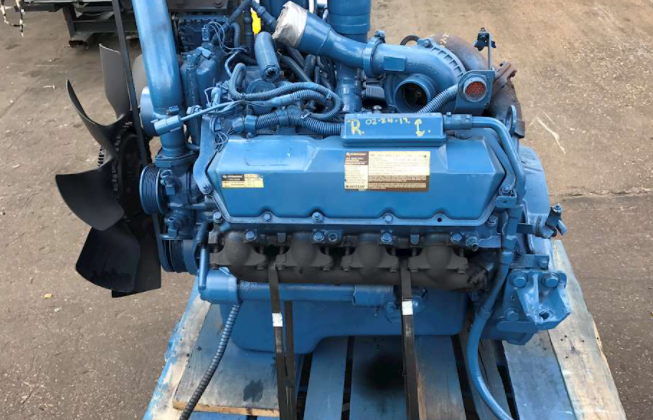 The T444E engine name comes from a few things. T stands for turbocharged. 444 represents the 7.3L engine displacement in cubic inches, and E stands for electronically controlled. As with the 7.3 Powerstroke, the Navistar 7.3 variant uses a cast iron block and heads. International T444E engines use a slightly over-square design with a longer stroke than bore. This is the same exact block and cylinder designs as the 7.3 Powerstroke made for Ford trucks. That also applies to the single overhead cam design with 2 valves per cylinder. Additionally, the T444E uses the same direct injected HEUI injection system.

Different power ratings are for different applications with different PCM software. Power for International T444E engines is less than the 7.3 Powerstroke. However, the Navistar engines offer more torque than the 7.3 Powerstroke in some versions. This is predominantly due to its use in commercial vehicles and the need for additional torque to support the added weight of commercial chassis. Again, the overall design of the engines is very similar. However, the Powerstroke variants target a bit more power and less torque.

As mentioned briefly with the engine specs the overall design between the 7.3 Powerstroke and T444E are very similar. They use the same block design, material, bore and stroke, etc. A few of the primary differences include:

There are also some other minor differences between the engines. However, for the most part the Ford and International 7.3L diesel engines are identical. The primary differences come down to PCM software rather than actual mechanical differences. Though, the T444E does use slightly different cams, fuel pumps, etc.

However, with respect to the major engine components themselves like the block and internals, these engines are very similar. Given the similar design of the International Navistar T444E it shares the same reputation for incredible reliability and longevity. While minor problems aren’t uncommon they tend to be small and easy to fix. Ultimately, the T444E is a very reliable engine overall.

These engines came out before the days of extremely strict emissions laws. Many of the headaches present on modern diesels were not an issue on the T444E engines. Additionally, International T444E B50 life of 350,000 miles goes to show these diesel engines are workhorses that provide reliable ownership for a long time.

Performance upgrades usually wouldn’t be a subject of discussion for commercial engines like the T444E. However, with the popularity of school bus conversions a market has developed for performance mods as these older engines are a bit underpowered by todays standards. Additionally, the terrible gas mileage you get out of a school bus T444E has owners looking for some fuel improvement upgrades.

The one thing you will need to keep in mind as you upgrade the T444E is the transmission. The transmission is going to be a bit limited from a power perspective so you might need to look into transmission upgrades if you are trying to add more than 100hp+. However, if you just want a simple tune for slightly better power and MPG then the stock transmission should hold up okay so long as it is in good condition currently.

We have an article on 7.3 Powerstroke Mods which is a good template for upgrades on the T444E. Companies and providers differ but the general things to consider are tuning, exhaust, intakes, and turbo upgrades. Power adders vary depending on what version of the T444E engine you have, but here is a general list of worthwhile upgrades:

The 175hp version of the engine is the same as the 230hp version. They use the same turbo and fueling system across all versions so the only difference is the tune. Therefore, you can alter the tune and a few other things to essentially upgrade to a more powerful version of the engine. The cool thing is any International Dealer should be able to do this pretty quickly and cost effectively.

Most of the quotes we’ve seen only require a few hours of labor making this one of the best upgrade options for the T444E.

The dealership option might feel the most safe for anyone looking for a little tuning bump. However, there are also aftermarket tuning options for the 7.3L International engine. This is a turbocharged engine and therefore it can make additionally power pretty easily. Go Hungry Power makes a PCM chip that can add 100hp+ to any 7.3L engine. At $349 it’s the best bang for your buck out there and is more cost effective than the dealership option.

You’re not going to find any exhaust kits out there for buses or commercial trucks, but you can have one custom fabricated. Since these engines didn’t come with much emissions equipment you should have a lot of options for upgrading the exhaust system. Ultimately, a downpipe upgrade would provide the biggest benefits alongside a full exhaust system. However, on a full size bus an exhaust system that long might be quite expensive so focus on the things that have the greatest decrease in backpressure like the downpipe.

Turbo upgrades are available for the T444E. There are a number of them out there that will bolt-on directly to the stock turbo location and offer some decent power increases. However, turbo upgrades are a bit more advanced of a topic and probably not necessary if you are just looking for a little power bump on something like a bus conversion.