The Detroit Diesel 60 Series engine began production in 1987 and remained until 2011. It’s an inline-6 four stroke diesel engine and was the first heavy duty diesel engine with full electronic controls. The Detroit 60 Series earns much praise for its great balance of fuel economy, performance, and longevity. However, no engine is perfect and there are no exceptions here. In this article, we discuss 60 Series engine specs, reliability, problems, and more. 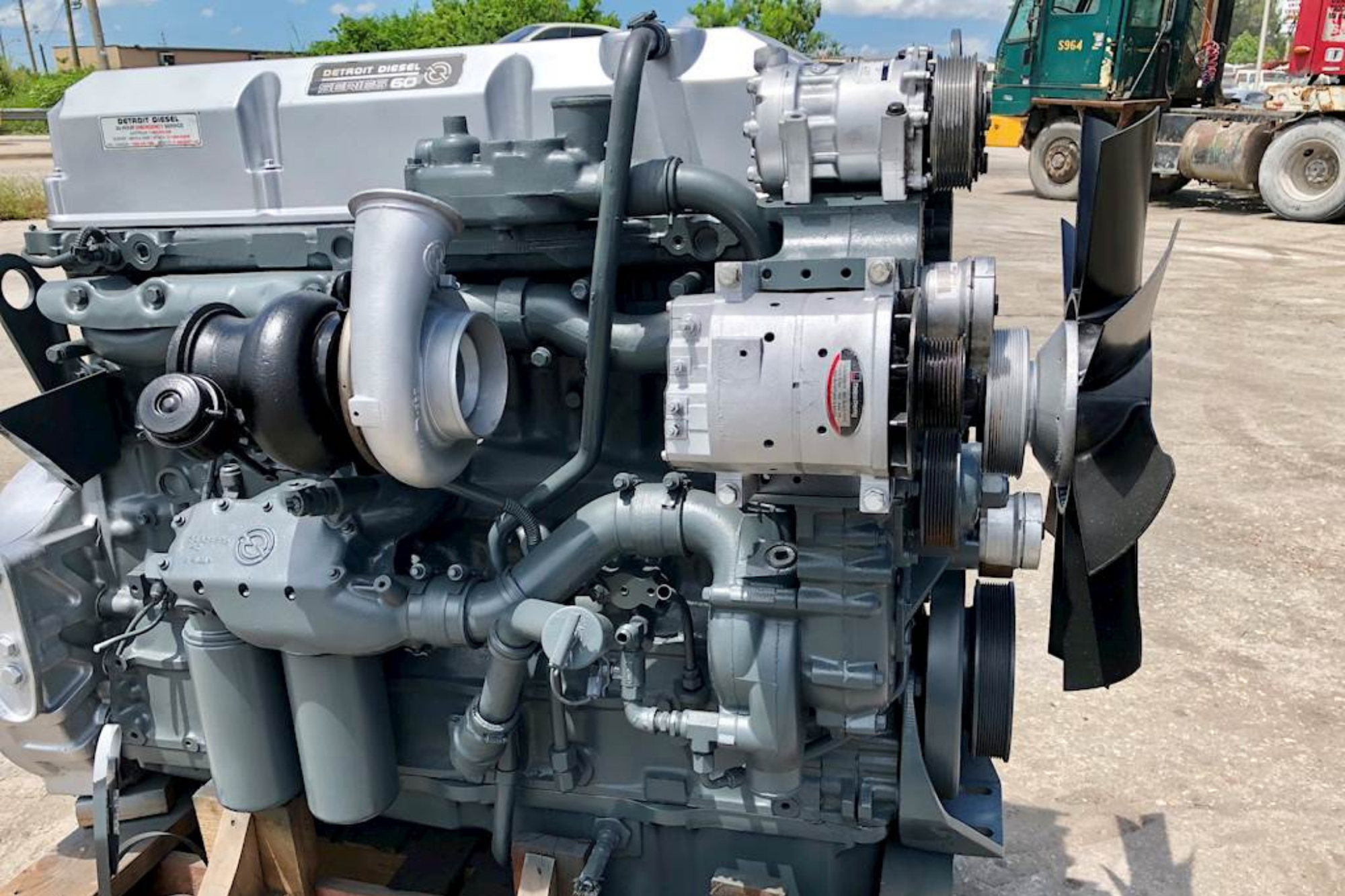 As a large displacement, heavy duty engine the Detroit 60 Series diesel engines have widespread uses. They were popular engines in class 7 & 8 on-highway trucks and buses. Other uses include heavy-duty off-road and marine applications. The 11.1L Series 60 engine was popular on many USA buses. Once the 11.1L was discontinued in 1998, the 12.7L became the primary motorcoach engine. 14.0L Detroit Diesel engines became the popular semi-truck option once they were introduced in 2001.

Anyway, outside of uses, there’s a lot of other background info to cover when it comes to the Detroit Diesel 60 Series engines. One important topic revolves around the DDEC electronic control.

There are countless benefits to the electronic control of the 60 Series diesel engines. Again, this was the first engine to begin using full electronic control and it wasn’t until several years later than other manufacturers followed. This control is referred to as Detroit Diesel Electronic Control (DDEC).

DDEC allows for diagnostics, shutdown timers, speed limiting, cruise control, and many other functions. Ultimately, owners are able to view valuable engine management reports. This helps Detroit 60 Series owners avoid engine abuse and improve fuel economy among other benefits. DDEC did go thru multiple updates over the years, so we’ll break that down quickly below.

DDEC I was the original system in 1987 and lasted until 1992. It was a 2 box system with an ECM in the cab, and an EDM in the engine. The EDM on the engine was responsible for operating the fuel injectors.

In 1992, the DDEC II system began replacing the earlier version. Rather than two-box, this system uses a single box mounted on the 60 Series diesel engine. The DDEC II system was a good improvement and was very popular with fleet operators.

The DDEC III system came out in 1992 along with the II version. A primary difference with DDEC III on 60 Series engines is that it introduced dual voltage 12V/24V ECM units. This made it easier to install into a variety of applications, such as marine and industrial.

1997 saw the introduction of the DDEC IV control system. This was mostly to incorporate other Detroit 60 Series engine changes like a waste-gated turbo. Otherwise, the DDEC IV system was meant to improve power, torque, and performance.

*The 60 Series peak horsepower occurs at 1,800 RPM across all engines. Torque peaks at 1,200 RPM for all engines as well. In some continuous duty applications the engine speed is limited to 1,800 RPM.

All variants of the 60 Series engine are well respected. The 11.1L and 12.7L engines were very unique for their time in 1987 as they were the first heavy-duty diesel engines with full integration of electronic controls. However, the 14.0L 60 Series engine is especially well-known in the heavy-duty segment. With 500+hp and 1,650 lb-ft the 14.0L Detroit engine delivers great performance.

Anyway, these engines are from the same 60-Series family and that’s shown in the similar specs. They’re all large displacement, inline-6 turbodiesel engines. They also share the same cast iron design with 4 valves per cylinder, wet cylinder liners, and 7 main bearings.

The Detroit 60 Series engines have all earned a good reputation as being reliable work horses. Detroit Diesel even initially recommended major overhaul intervals of 500,000 miles. However, that was raised to 750,000 miles after they proved to be strong, reliable engines. Still, no engine is perfect and that applies to the Detroit 60 Series diesel engine. In the next sections, we will cover some of the most common 60 Series problems including:

Again, the Series 60 engines are reliable and offer good longevity. The above are some of the most common issues, but that doesn’t mean all engines run into these problems. In other words, we’re classifying these as the most common for good reason. It doesn’t mean the problems are truly common, but when things do go wrong these are a few key areas.

That said, we will break down these Detroit 60 Series problems in greater depth below. We’ll then wrap up the article with overall thoughts on 60 Series reliability and longevity.

Wrist pin problems were a random issue that occurred on a number of 60 Series engines built before 2002. The wrist pin wasn’t totally defective as plenty of engines never ran into this problem. However, some wrist pins had a defect that causes the piston pin and crown to separate. The rod could also potentially disconnect in some instances.

Ultimately, wrist pins weren’t a very common problem on the Detroit Diesel 60 Series engine. However, damage could be pretty severe in the cases of defective pins. It could lead to components being thrown thru the block. Of course, a hole in the block isn’t a cheap ordeal and often results in the need for engine replacement.

One thing Detroit did to improve fuel economy was program the engine to idle at low RPM’s. However, it turns out, the low idle speed often wasn’t high enough to properly operate the oil pump. This would lead to low oil pressure at idle. In turn, the bearings would wear down prematurely due to oil starvation and poor overall oil flow.

This bearing issue specifically mostly affected pre-1997 engines. As such, Detroit 60 Series bearing problems are most common on the 11.1L and 12.7L variants of the engine. Detroit later increased idle speed slightly and improved oil pressure at lower RPM’s. That said, later engines can still run into bearing issues but it’s much less common.

Those familiar with newer diesel engines understand the hassles that emissions systems can cause. Later Series 60 Detroit engines used an EGR system to lower NOx emissions. There are a number of potential problems that arise from the EGR system. However, the primary cause of trouble is the EGR cooler.

Coolant leaks from the EGR cooler are a common issue on the Detroit 60 Series diesel engines. As a side note, coolant leaks in the oil cooler is also a potential problem. Anyway, white smoke, coolant loss, and overheating are potential symptoms of EGR issues. Overheating can be a serious symptom that can cause further damage and problems, so be on the look-out.

Exhaust manifold function is pretty simple – the exhaust manifold is meant to collect exhaust gases from the cylinders before merging into a common collector. One potential issue with the Series 60 diesel engine is a cracked exhaust manifold. It’s generally a fairly minor issue, but should still be addressed as soon as possible.

Look for symptoms such as excessive engine noise, power loss, or burning/raw exhaust smells from the engine bay. Once the manifold cracks, exhaust gases seep thru so you should notice the smell or hear that the engine is louder. However, symptoms can be tough to identify until the crack expands.

As a final 60 Series topic, we’re sticking with generic emissions system issues on the newest 14.0L variant. The 60 Series engine was around for a long time, but the 14.0L didn’t come around until 2001. It remained in production until 2011 and emissions laws became more stringent during that period.

We already talked about EGR issues, and that’s a system found on the Detroit 60 Series 14.0L engine. Some newer ones also have DPF, DOC, and other emissions systems. Again, many familiar with newer diesels likely understand these emissions systems can be a hassle. The 14.0L 60 Series is still a great engine, but it’s more complex and has more room for failure compared to older Detroit Diesel engines.

Despite a few common problems and design flaws, the Detroit 60 Series diesel engine still delivers great reliability and longevity. It’s a popular and well-renowned diesel engine for good reason. Diesel Power Magazine even ranked the 60 Series as the second best diesel engine in their “Best Diesel Engine Ever” list.

Detroit Diesel produced over 1 million 60 Series engines. That means these engines are pretty easy to find parts for. There are also plenty of shops and mechanics familiar with the 60 Series diesel engine. As such, it’s an easy engine to maintain and upkeep even when you do run into the occasional issues.

The Series 60 engine is also simpler than many newer diesel engines. All of these factors combined with great power, torque, and performance make the Detroit 60 Series a great diesel engine.

What’s your experience with the Detroit 60 Series? Leave a comment and let us know!