Cummins began producing the original 8.3 C-series engines in 1985. The ISC 8.3 Cummins came out in 1998 and uses the same basic design. It offers up to 400 horsepower and 1075 lb-ft of torque. This made it a great engine for fire trucks, trash trucks, and heavy equipment. However, the ISC 8.3 diesel is likely best known for its use in motorhomes. Many regard the 8.3L as a legend for its great balance of performance and durability. In this article, we discuss the 8.3 Cummins diesel engine specs, problems, and reliability. 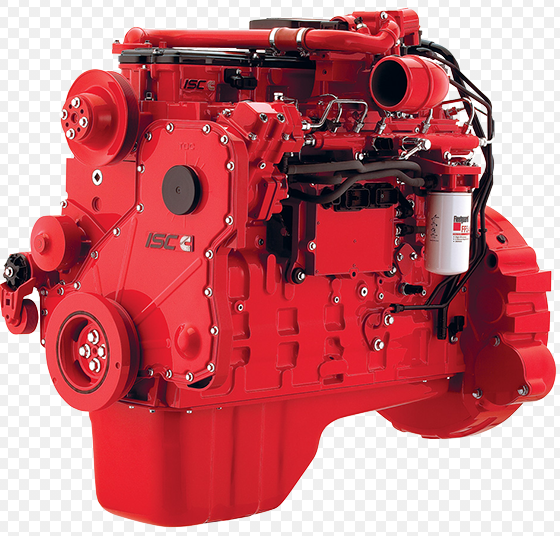 The ISC 8.3 has a lot to offer with its strong design. A cast iron block and head ensure the engine is built to last and withstand tough operating conditions. Its large 8.3L displacement coupled with a turbo allow the engine to make impressive torque for its era. Meanwhile, an over-square design helps the 8.3 Cummins make solid peak horsepower.

However, the weight of the engine is the one drawback. The 8.3L diesel engine comes in at a whopping 1,630 pounds when dry. Add in fluids and it’s a seriously heavy engine. It’s not an issue for large trucks or heavy duty equipment. Though, it’s a major drawback that limits the ability to use the 8.3 Cummins in smaller vehicles.

Original variants of the C-series 8.3 are known as the 6C8.3. It shares the same base design with the later ISC 8.3 engines. However, the earlier engines were mechanical and a bit simpler.

Cummins made a plethora of updates for the ISC 8.3 diesel version. For one, it uses a variable geometry turbo for better engine response and torque. Cummins also moved to common rail fuel injection for better performance and cleaner emissions. It’s a good change in many ways, but the older mechanical injection systems are often regarded as more reliable.

Additionally, the 8.3 Cummins ISC diesel engine has mid-stop cylinder liners. This makes rebuilds a lot easier since the liners can be removed and replaced. Other updates to the 8.3 ISC diesel include direct piston cooling, crankcase breather, and roller cams. The list of updates goes on and on. Point is – the 6C8.3 and 8.3 ISC share a similar base design but are very different engines.

Engine problems are always a tough topic, and that’s especially true with the 8.3 liter Cummins diesel engine. There are so many different uses for this engine, and longevity is measured in different ways. Mileage is generally an important measure when it comes to medium duty road trucks. However, hours are the bigger factor for most heavy duty off-road equipment.

In the medium-duty truck sector, especially motorhomes, the 8.3 Cummins is often considered a legendary engine. However, they’ve always appeared a bit more problematic in heavy-duty equipment and machines. We’ll circle back to that in the coming section. For now, let’s discuss a few of the common issues on 8.3 Cummins diesel engines.

This problem mostly affects 8.3L Cummins engines found in heavy-duty off-road equipment. Around the 6,000 to 8,000 hour mark it’s not unheard of for the 8.3 diesel engine to lose a chunk of the block. This is especially common in 8.3 engines in use in combines.

It’s a very uncommon issue for road-going 8.3 Cummins engines, such as motorhomes. It seems the 8.3L diesel doesn’t like steady high speed and load for long periods. These are conditions that usually occur in heavy duty equipment. However, it is unlikely diesels used on-road will meet those conditions for. As such, we don’t believe this should be a concern for on-road swaps or motorhomes.

As with the above, dropped valves on the 8.3 diesel aren’t very common for road vehicles. This problem is more common to see on heavier duty machines. It likely ties into similar reasons to the above. The 8.3 Cummins simply doesn’t do quite as well with high engine speed and loads.

CAPS refers to Cummins Accumulator Pump System. Original 8.3 Cummins diesel engines feature the mechanical P pump, which is very reliable. The 8.3 CAPS is electronically driven and runs into many of the same problems as on the 5.9 Cummins. These include failures with the lift pump, trouble due to excess water in diesel fuel, and excess heat. All of these may cause failures or faults with the 8.3 Cummins CAPS.

The CAPS issue mainly affects motorhomes and other on road engines. Most agricultural vehicles with the 8.3L diesel, even after 1998, use the older mechanical pumps.

The above isn’t an exhaustive list of the various things that may go wrong with the 8.3 ISC diesel. These engines are aging and with age comes more potential problems. A lot of 8.3 liter engines in agricultural use are likely already well beyond their useful life. The design of the 8.3L diesel does make rebuilds easy, but that brings concerns of its own. With the age of the 8.3 Cummins it’s definitely becoming an easier decision to upgrade to something newer.

That said, when it comes to the motorhome sector there are tons of opportunities to find 8.3 diesel engines that are still in excellent shape. A lot of RV’s don’t rack up very high mileage, and it’s uncommon to see motorhomes make it much past 150,000 miles. The 8.3 Cummins is a great, reliable engine that – in most cases – will well outlive the useful life of an RV itself. As such, it’s still a sought after engine for some uses. Swaps into 3500, 4500, etc trucks are possible and make for an awesome light or medium-duty truck.

Anyways, back on topic about 8.3 Cummins reliability. They’re often considered legendary engines in the motorhome world for good reason. The 8.3L diesel generally outlasts a motorhome with very few or no engine problems at all. However, in the agricultural world the 8.3 engine doesn’t have quite the same rep. That’s not to say it’s a bad engine by any means. However, the 8.3 is definitely best suited to on-road use and offers a great balance of performance and durability.