The Cummins R2.8 turbo diesel crate engine is also known as the Repower 2.8. This small inline-4 diesel engine initially hit the markets around 2017. However, it’s not a very well known Cummins engine due to its competition with the legendary 4BT. Still, the R2.8 is a compelling diesel engine with plenty to offer. In this guide, we discuss the Cummins 2.8L turbodiesel including specs, performance, problems, and more. We also compare the R2.8 to the older, popular 4BT diesel. 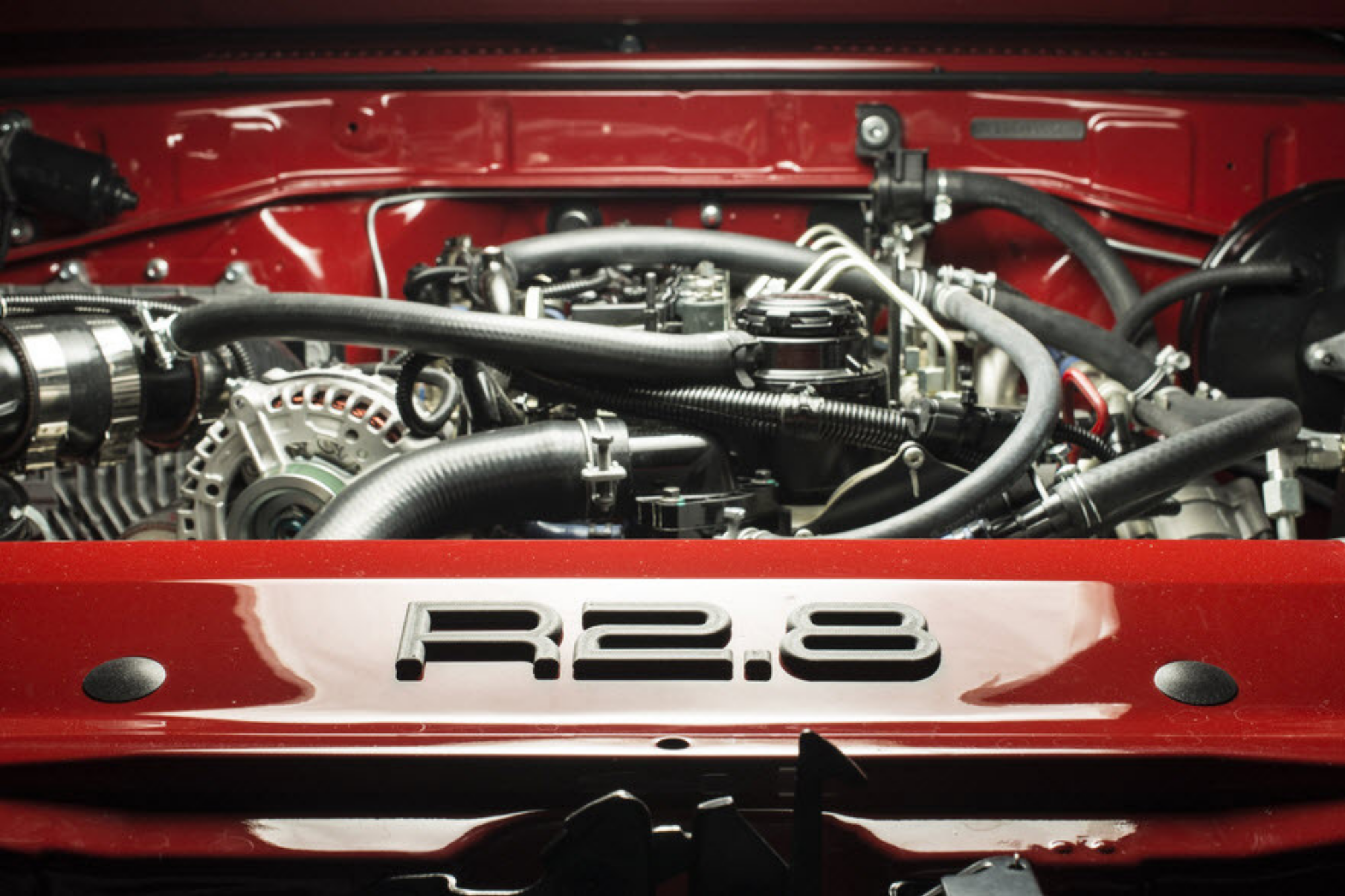 Cummins R2.8 engine are available brand new directly from Cummins at a current price of $8,499. We believe it’s a reasonable price given the 2.8L inline-4 offers a nearly complete package. The crate engine includes everything from the accessory drive to a wiring harness and engine control module. There’s plenty more in between. A cooling package and battery are among the few items missing from the Cummins 2.8 crate engine.

Point is – unlike many crate engines – the 2.8L diesel offers just about everything you need to get up and running. There’s also a limited 2 year/2600 hour warranty. Check out Cummins site for more info on the warranty and other factors. Anyways, the R2.8 is off to a good start with its nearly complete package and solid price. There’s a lot to discuss with this inline-4 turbodiesel, so let’s jump right in and look at this engine from top to bottom.

*The R2.8 is not emissions compliant for vehicles newer than 1999.

Specs for the Cummins 2.8 and 4BT are as follows:

Looking at the basics, the R2.8 engine is a 2.8L inline-4 turbodiesel engine. It uses direct injection via Bosch high-pressure common-rail fuel injection. The 2.8L engine is an all cast-iron design – as is the case with many Cummins diesel engines. Cylinder liners are serviceable which makes the R2.8 rebuild friendly.

Specs for the Cummins 2.8 put the engine at 161 horsepower and 310 lb-ft of torque. Output was originally a bit lower before a new ECM calibration. The PP1 ECM calibrations is available for Cummins R2.8 owners who bought the engine prior to the update. Lastly, the engine weighs in at 503 pounds. It may seem heavy for a 2.8L engine, however it’s actually light considering the cast-iron design.

There likely isn’t much of a true comparison between the Cummins 4BT and R2.8 diesel engines. Yes, they’re both inline-4 turbodiesel engines from Cummins. Both diesels also use a cast iron block and cylinder head. However, that’s about where the similarities end.

The 3.9L 4BT stems from the original Cummins 5.9 6BT engine also simply known as the Cummins 12-valve. Those familiar with diesels likely understand the 6BT is still hailed as one of the strongest, most legendary diesel engines ever. Its power potential is sky-high and the 6BT is also extremely reliable and nearly bulletproof. Cummins 4BT engines are much like the 6BT simply with two cylinders “chopped off” – for a lack of better words.

Ultimately, Cummins 3.9 4BT engines are mechanical and deliver excellent reliability and longevity. They also have a lot of aftermarket potential. On the other hand, the Cummins 2.8 uses common rail injection and relies on a lot more technology and electronics. The R2.8 turbodiesel isn’t anything like the 4BT. It is as strong as it needs to be for the rated output, but it’s not built to handle the same degree of power and abuse.

All that said, the Cummins 2.8 is still a great engine in its own right. It has a lot to offer given it’s a very complete crate engine. The modest 503 pound weight of the R2.8 also makes it a viable option for many different vehicles. Combine that with the strong cast-iron design and the 2.8L turbodiesel is a stout engine, overall.

We touched on power, performance, and aftermarket potential a little bit. Now, we will expand on these topics further. 161 horsepower and 310 lb-ft isn’t going to turn any heads. It’s a little underwhelming considering modern diesels – like the 6.7 Cummins and 6.7 PowerStroke – churn out more than 1,000 lb-ft.

However, it’s unlikely you are looking at the Repower 2.8 to tow insane weights. It’s a better swap for things like normal street driving, off-roading, crawling, etc. The 310 lb-ft available at 1,800 RPM is surely enough to deliver exceptional performance. It’s also not tough to squeeze an extra 50-75+ lb-ft out of the engine if needed. A tune and simple bolt-on mods will get the job done. Again, don’t expect crazy numbers from the Cummins R2.8, but a modest increase in power is reasonable.

Of course, fuel economy is hard to pin down. This can depend on many factors like what car or truck you’re swapping the 2.8L turbodiesel into. Wheels, transmissions, and tons of other factors are at play as well. That said, the Cummins 2.8 shouldn’t have any issues delivering 20-25mpg on the highway. You may even see close to 30+mpg on some platforms and builds.

It’s a little challenging with the R2.8 turbodiesel, though. Keep in mind – the actual Repower 2.8L crate engine is still a pretty new engine. It hasn’t been around long enough to draw valuable conclusions on Cummins 2.8 reliability or longevity. However, there are some similarities with the ISF 2.8 engine.

As with the ISF, the R2.8 is built in China. Since 2009, the Cummins 2.8 ISF was licensed and installed in Foton Tunland trucks. The engine has a pretty poor reputation overseas. There are plenty of reports on serious issues like rod and bearing failures, turbo problems, fueling issues, etc.

The complaints from overseas owners are a bit concerning. It’s also an old enough engine to the point reliability and longevity are better known. The more concerning factor is that some severe Cummins ISF 2.8 problems occur prior to 200,000 kms (about 125,000 miles). Compare that to the legendary reliability and longevity of many Cummins turbodiesel engines and the ISF 2.8L is disappointing at best.

Are the Issues the Same on the R2.8 Cummins?

Now, back to hopefully some better news. The R2.8 crate engine didn’t come around until about 2017 – an entire 8 years after the release of the ISF 2.8 in Foton Tunland trucks. R2.8 engines are still built in China, but they are assembled in the United States (the ISF was assembled in China).

Anyway, it’s a lot of time for Cummins to have made the necessary adjustments and improvements to the engine. R2.8 engines aren’t an exact replica of the international ISF 2.8 that hit the markets in 2009. Additionally, after much research, we weren’t able to find any major complaints over the Repower 2.8L crate engine. There was nothing to indicate there are any major reliability or longevity concerns. Again, it is still early for the R2.8 so time will tell if any major concerns do start popping up.

Cummins 2.8 engines do meet EPA tier 1 emission standards, so they’re street-legal in any 1999 or older light-duty truck. However, the emissions standards do mean the R2.8 has EGR and DOC. These early standards were much less demanding than they are today, so the EGR and DOC systems shouldn’t be common issues.

Is the Cummins R2.8 crate engine reliable? So far, it appears to be a reliable engine. As a side note – sorry for the slightly repetitive nature of this section. The R2.8 is still a bit too new to say with confidence that it’s a reliable engine that will also deliver good longevity. One could base assumptions off the history and data surrounding the ISF 2.8L Cummins engine. However, we’re not a fan of this approach since the engines are not the same.

Ultimately, part of the unknown is something you have to accept if you’re seriously considering a Repower 2.8L turbodiesel. Cummins does have an excellent past building stout, reliable, and long lasting turbodiesel engines. This isn’t their first time around the block, and certainly won’t be their last. One can only hope Cummins made the necessary improvements over the overseas ISF 2.8.

The Cummins R2.8 crate engine is an interesting engine to discuss for many reasons. Cummins’ crate engine program is still relatively new, and the 2.8L turbodiesel is the first engine in the program. It’s a nearly complete package at a current price of $8,499. That’s a pretty solid deal for a brand new engine from one of the biggest names in the diesel engine space.

With 161hp, 310 lb-ft, and a reasonable weight of 503 pounds it’s a compelling turbodiesel engine option for swaps and repowers. It also uses the durable cast-iron design with serviceable liners. No, the R2.8 likely won’t ever be as potent or reliable as the older 4BT. That’s not necessarily a bad thing nor a dig at the Cummins 2.8, though. It’s still a stout turbodiesel that does what its meant to do.

Reliability may be a concern for potential R2.8 owners. The ISF 2.8L engine never had a great reputation, but it’s also not a fair comparison to the newer, American assembled R2.8. It will likely take several more years and more R2.8 swaps until we have a better understanding of long-term reliability.

What are your thoughts on the Cummins 2.8? Are you considering one or do you have any personal experience with the R2.8?